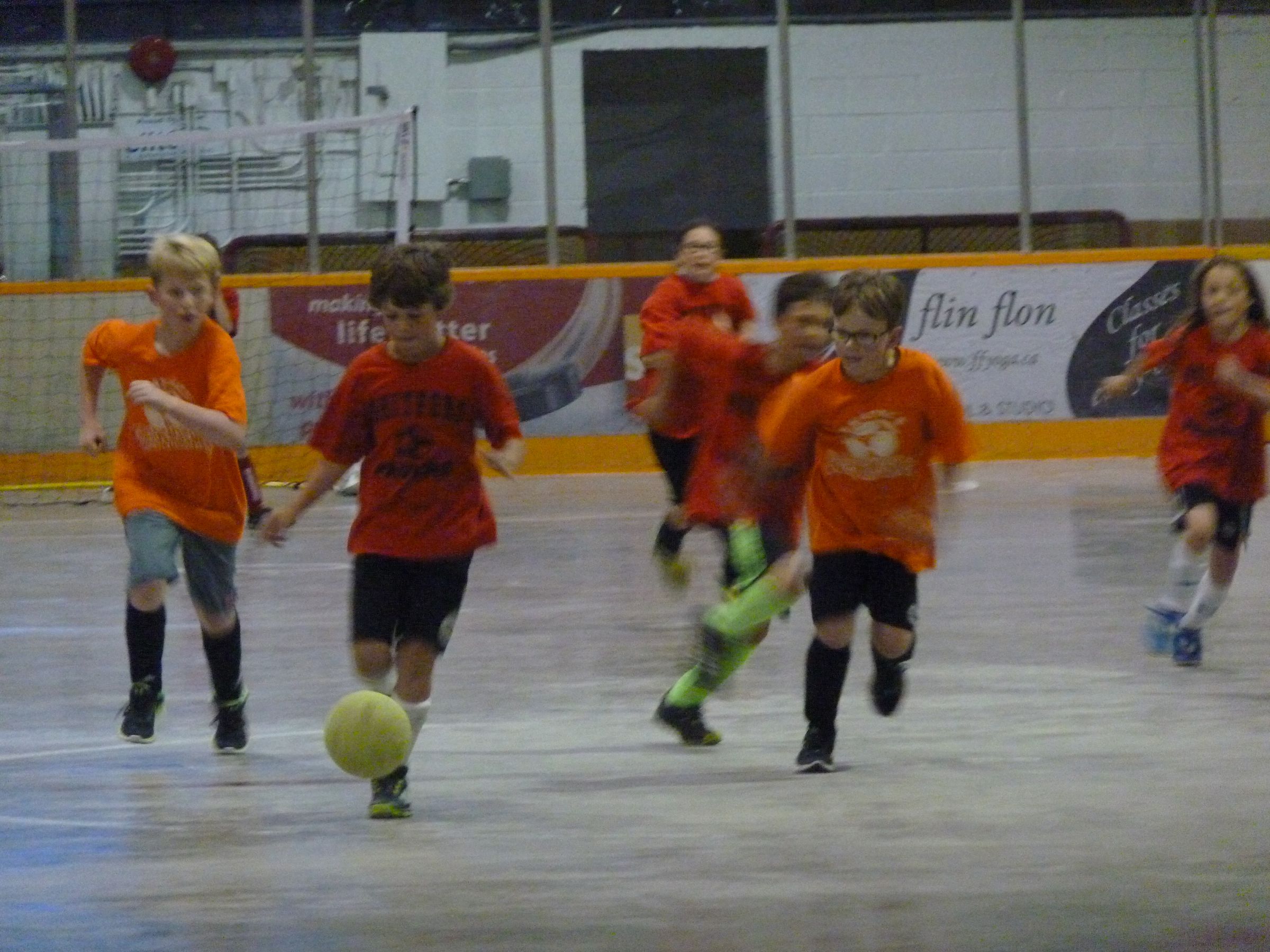 The Flin Flon Parks and Rec indoor soccer tournament took place at the Whitney Forum this past weekend, a month later than normal due to the length of the Flin Flon Bombers season.

10 teams took part and here are the results: 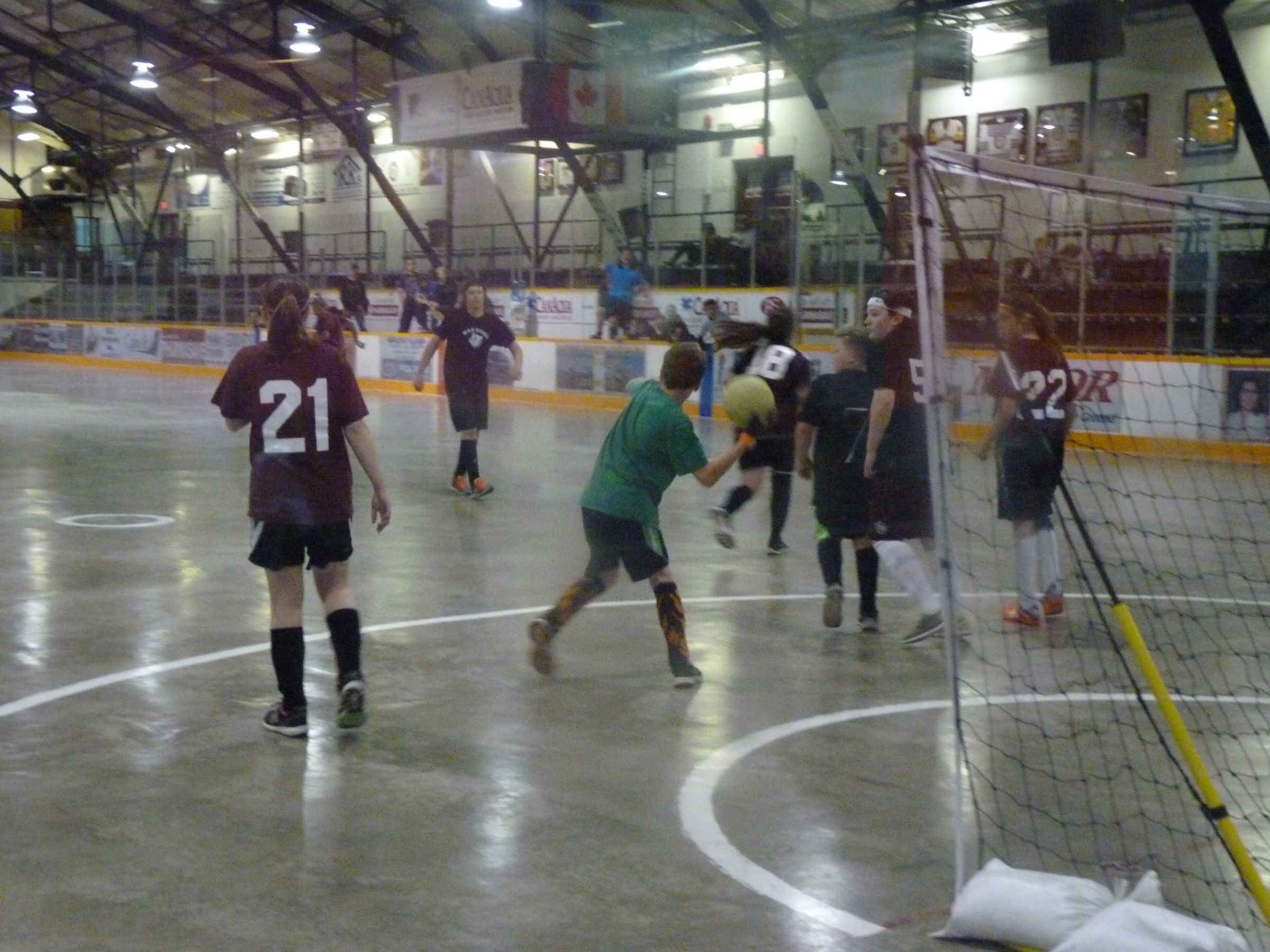 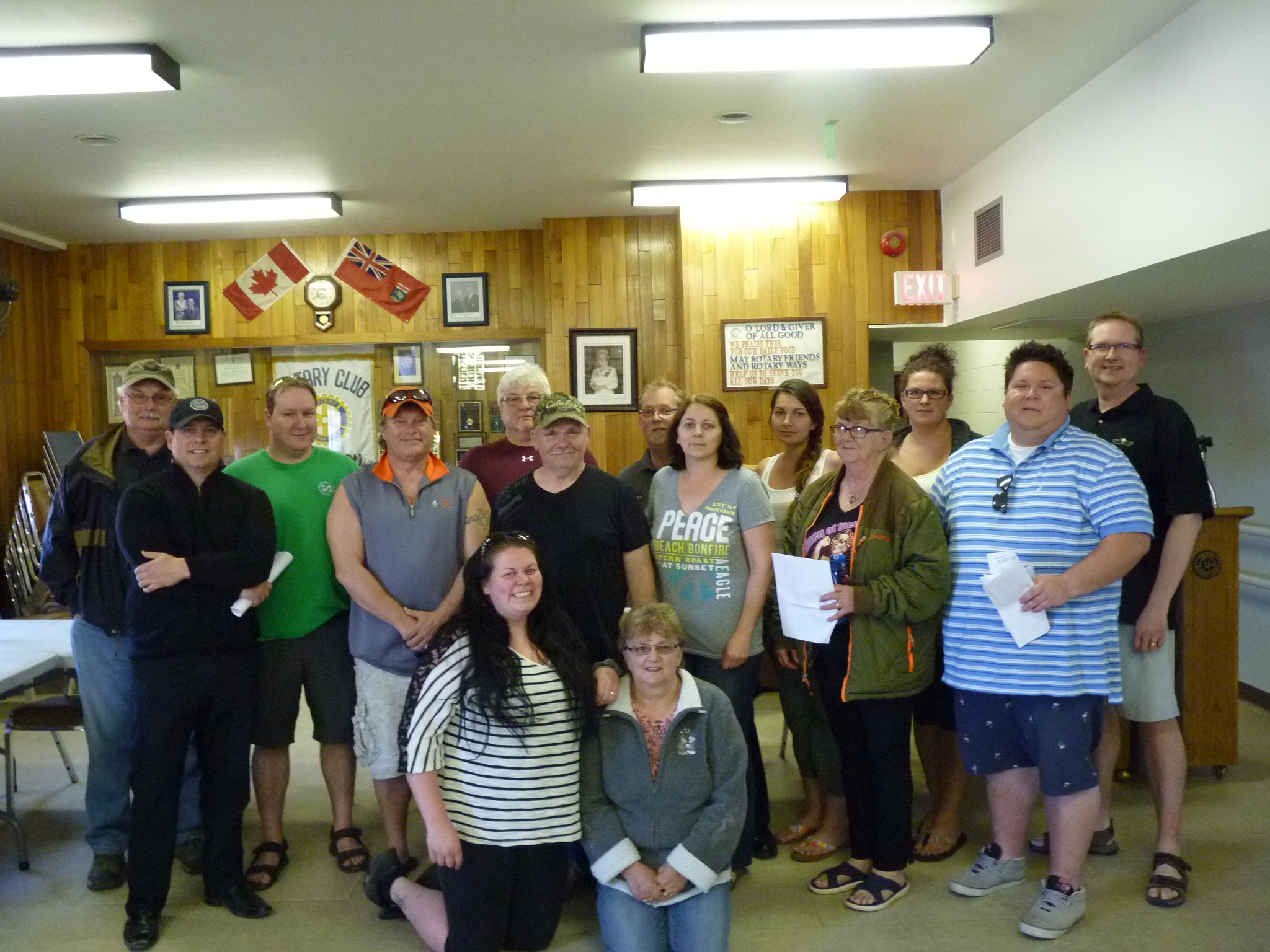 Mike Reagan gave a coach's report and said the future looks bright only losing 5 players from last year's team.19 players are eligible to come back including all 8 defensemen, both goalies and 9 forwards.

Over 100 kids are expected at this weekend's  spring camp in Saskatoon, and Reagan said they will sign between 6 to 8 kids from this group.

Reagan also commented that he will be on some recruiting trips which will take him into the States in July.

Bomber President Hank Kozar also addressed the crowd and thanked all the volunteers, sponsors, fellow board members, fans and bus drivers for their continued dedication over the past season.

Kozar called it the most memorable season for him and his 20 years of service to the club, and was very happy with the excitement this year's playoff run was for the whole community.

Dave Brooks the Secretary- Treasurer reported that with this year's playoff success, they were able to trim over $90,000.00 off their overall debt. Things are really moving in the right direction with only one more payment remaining on their bus and a couple of other minor things they still have to pay off.

The Bombers were able to generate a lot of money off marketing and both Brooks and Kozar thanked Tanya Benoit and her crew for their hard work and perseverance.

Here is this year's board of directors after last night's meeting.

The Flin Flon Bombers would also like to thank Paul Garret for his many years serving on the board in many capacities.

Over 60 golfers took part and here are the results:

Closest to the pin- Todd Quinn

Closest to the pin and Long Drive- Mitchell Reid

Don't forget the PLGC AGM will be Wed May the 25th at the Clubhouse starting at 7.

If you are interested in applying you are asked to go to flinflonminorhockey.com and print off an application form.

Fill it out and send it to flinflonminorhockey@gmail.com or submit to po box 862, Flin Flon MB, R8A1N6.

Application deadline is May the 31st and interviews will be conducted June the 1st.

The Phantom Lake Golf Club is all set to host their first big event this summer, with their opening day tournament this Saturday.

Registration deadline is this Friday and is open to everybody including Junior's, Men and Ladie's.

Shotgun start this Saturday at 11AM.

The Flin Flon Bomber AGM is scheduled for Wednesday May the 25th , 7 PM at the Flin Flon Community Hall Green Room.

The agenda  will include a Coach's report, President's report, Treasurer's report as well as questions from the floor. Most board positions will also be up for election.

Congratulations to a group of 9 basketball players from Flin Flon, Creighton who went undefeated and won SR Provincials in Regina this past weekend.

They ended up going 5-0 and won the Championsip, scoring a basket with less than 6 seconds remaining in the game.

Here are the names of the winning squad.

Here are the award winners:

Rookie of the Year – Justin Nachbaur

James Buchanan was confirmed as head coach for 2016/17.

Tryouts for 32nd season will be in late August.

Eleven new members have been selected to receive the province's highest honour, the Order of Manitoba including former NHL superstar and former Flin Flon Bomber  "the Riverton Rifle" Reggie Leach.

Lt. Gov Janice Filmon,  chancellor of the order, made the announcement today.

Reggie played for the Flin Flon Bombers between 1966 and 1970 and scored an incredible 255 goals in 4 years before being drafted by the Boston Bruins in the first round in 1970.

He was later traded to the California Golden Seals in 1972 before winding up with Philadelphia in 1974 where he won a Stanley Cup later that season. Reggie played 13 years in the NHL and was named to the All- Star team in 1976 and 1980 and played for team Canada in the 1976 Canada Cup.

He also won the Conn Smythe Trophy for the Most Valuable Player in the Stanley Cup Playoffs in 1976 when he scored 19 goals in 16 games which stands as a record today, tied with Edmonton's Jari Kurri who did it in 19 games.

Reggie spends a lot of his time these days travelling to remote communities to offer hockey schools and inspire young people , through his own life experiences by encouraging healthy life choices.

He has also written a book " The Riverton Rifle- My Story " about his life around the great game of hockey and is a must read with some real tear jerking stories.

Minor Hockey President Scott Eastman chaired the meeting and mentioned enrollment was up this past season with 222 kids enrolled from Novice up to High School.

Scott also mentioned that their focus this year was development for all the different age groups.

Some changes have been implemented including adding a Communications Director who will primarilly handle the web site. Fees have also gone up for all levels which will eliminate fundraising for the upcoming season.

Flin Flon Minor Hockey will also stay with Hockey Manitoba for another year and look at prospects for the possibility of joining the SHA for 2017. Public forums and more information will be presented at a later time.

Here is the 2016 Flin Flon Minor Hockey Board Of Directors

The Phantom Lake Golf Course is just about ready to open up for the 2016 season.

Chris has confirmed that the course has wintered well and will officially open up this Wednesday at 10 am for people with paid memberships.

The course will open up a week Wednesday for the rest of the general public.

If you have any questions regarding the Pro Shop, lessons , up coming tournaments and tee-times, make sure you call the pro shop at 306-688-5555. 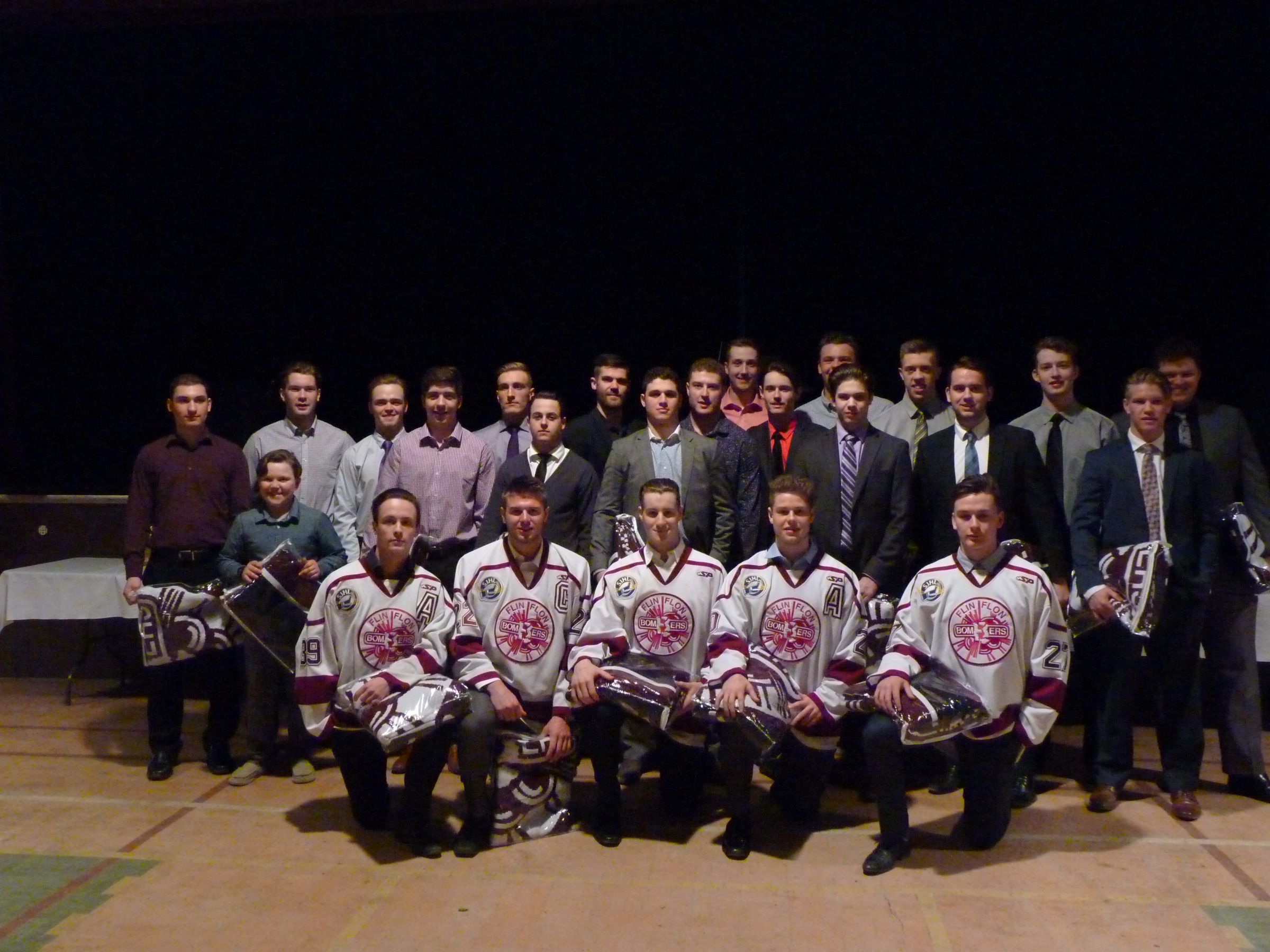 The Flin Flon Bombers officially wrapped up their season with their year end banquet this past Saturday at the Flin Flon Community Hall.

Alex Smith had a big night picking up four awards including the RBC 3 Star Award, George Leel Memorial for most points, CFAR Most Valuable Player and the Flin Flon Bomber Most Popular Player along with Brandon Switzer.

Other award winners were:

A big thanks to Dan and the staff from Chicken Chef on a wonderful meal and a big thank you to all the sponsors, fans, billets, parents and board members for coming out to wrap up one of the most successful seasons in the past 20 years.