Flin Flon Creighton Minor Ball is excited to announce their regular season will start this Monday May the 6th, weather permitting.

Here is the schedule for this year.

All games will be played at Creighton field.

The Phantom Lake Golf Club is getting ready for another season and the Pro- Shop is now open 9-5 daily.

Kelly McLaren is back as the new pro and says the course wintered very well and the greens are in excellent shape.

You can stop by the Pro- Shop to pick up your membership and there are some great incentives this year.

Weather permitting the course should be ready to go in a couple of weeks.

The Flin Flon Bombers are proud to announce the signing of Cole McCaig as Assistant Coach.

McCaig played parts of three seasons with the Bombers and after graduating from Marian University in 2018,  he served as an Assistant Coach and Marketing Director with the Bombers last season.

McCaig will be assuming the duties left from departing Assistant Coach Garry Childerhose.

The Flin Flon Bombers will be holding their AGM on Wednesday May the 29th, 7 pm at the Green Room at the Flin Flon Community Hall.

The agenda will include addresse's from the President and Coach as well as a financial report.

There will also be a chance to ask questions from the floor and conclude with elections for board positions.

The Phantom Lake Soccer season is just around the corner and the league is in desperate need of coach's to start the year.

Here are the different divisions that are looking for coach's

Here is an interview with former Bomber Assistant Coach,  Gary Childerhose who is now the new Head Coach and GM of the Kindersley Klippers.

I caught up with Gary earlier today as he reflected on his time with the Bomber organization and how excited he is to be awarded his first Head Coaching job.

You can hear that interview here:  https://soundcloud.com/102-9-cfar-podcasts/gary-childerhose-interview

Flin Flon Creighton Minor Ball wants to give you one more chance to register for the up coming season.

Last chance registration will take place this Tuesday April the 23rd, 6-8 at the Creighton gym.

Congratulations to Bomber Assistant  Gary Childerhose who is the new Head Coach and GM of the Kindersley Klippers.

Childerhose will take over for the most recent SJHL Coach Of The Year in Clayton Jardine who stepped aside to pursue another opportunity.

Gary brings a lot of experience to the table including three years as a player with the Melfort Mustangs where he picked up 92 points in 131 games.

He joined the Bombers as an Assistant Coach 5 years ago and made an immediate impact on the players, fans and sponsors in Flin Flon and was a very popular figure at the Whitney Forum.

Childerhose was also very good at breaking down video and was a tremendous attribute in helping the Bomber organization graduate players to the NCAA college level.

This will be Gary's first official head coaching job,  although he does bring some head coaching experience to the table after looking after the club on three different occasions while Mike Reagan was at the World JR. A Challenge.

There will be no shortage of experience behind the Kindersley bench,  as another former Bomber coach Larry Wintoniak will stay on as the Assistant Coach and Assistant GM.

On behalf of the entire Flin Flon Bomber organization,  I would like to thank Gary for all his hard work and positive attitude and wish him nothing but success in the rest of his hockey career.

Congratulations to Flin Flon's Tanner Korchinski on winning the 2019 Allan Cup with the Lacombe Generals.

They beat the Innisfail Eagles 5-2 in the final this past Saturday.

He also made the SJHL All Rookie Team and was a Second Team All Star in his four years as a Bomber.

The Phantom Lake Soccer Club in conjunction with the Manitoba Soccer Association will be hosting a coaching clinic this Thursday at Hapnot.

This is for any coach's who will be coaching  children 13 and under and will cost $15.00. It will take place 5-10 PM and you can sign up on the Phantom Lake Soccer Club web-site at phantomlakesoccer.com. 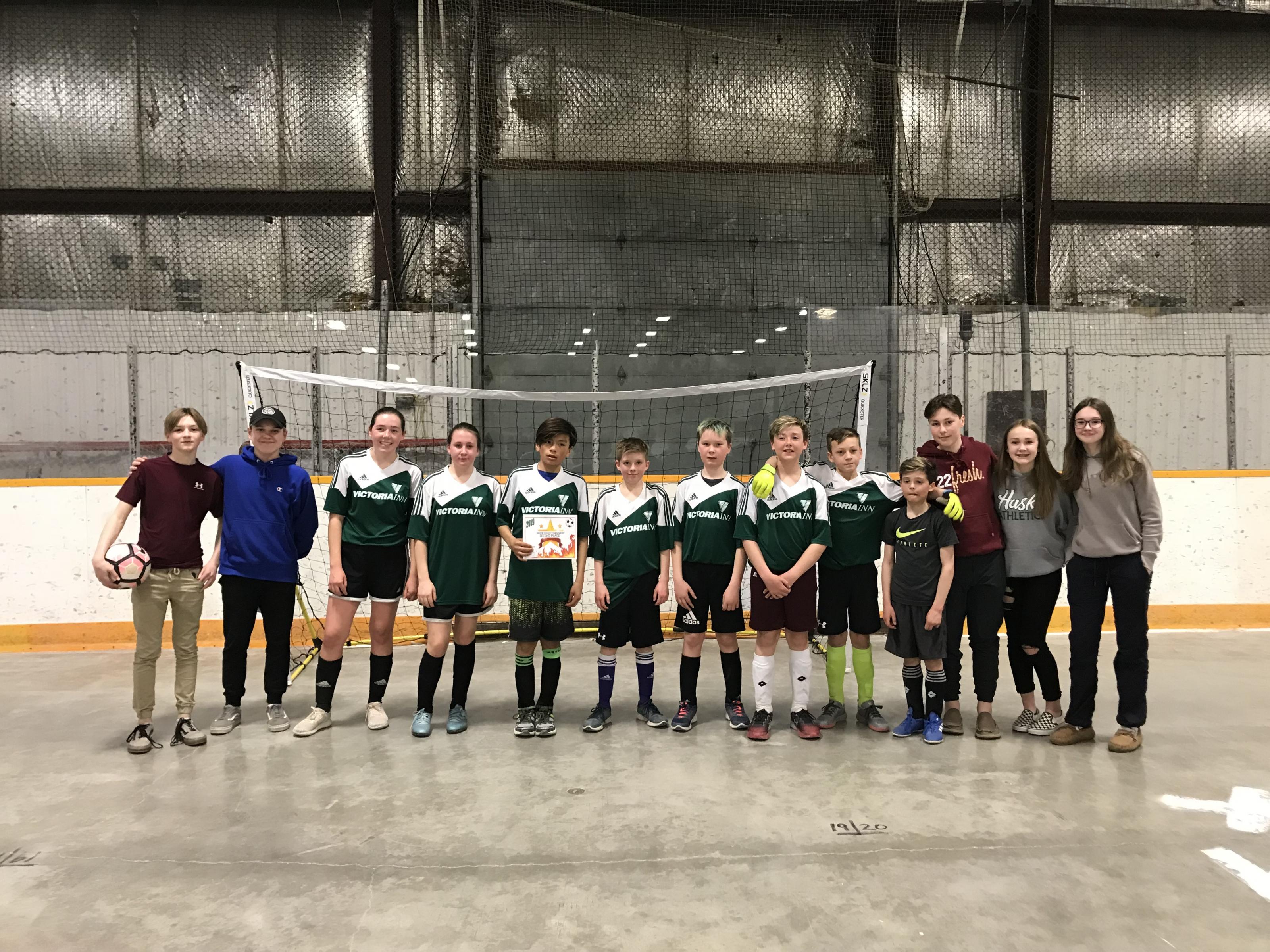 The Town Of Creighton and Phantom Lake Soccer Club hosted their indoor soccer tournament this past weekend at the Creighton Sportex.

A big thanks to the sponsors Arctic Beverages and Chicken Chef and to all the volunteer coach's.

The regular season will start in May.

The Town Of Creighton and the Phantom Lake Soccer Club will host their indoor tournament starting tomorrow night at the Sportex.

The Bombers battle the Jets at 7 and MA. Iron Works will take on the Vic Inn at 8.

Friday, the Jets VS MA Ironworks at 7, followed by the Vic Inn against the Bombers at 8.

Kinettes VS Rotary at 5 followed by the Credit Union against the Rockets at 6.

Friday the Co-op will face the winner of the Kinettes, Rotary game at 6.

Playoffs start Saturday at 9 with the two finals set to go at 6 and 7.

The Flin Flon Bombers will be hosting their Spring Camp in Saskatoon the weekend of May the 10th to the 12th.

This is open to players born between 2001 and 2004. Head Coach and GM Mike Reagan is expecting about 100 players to take part. 60 will be invited to Main Camp in the fall.

The camp will take place at the Agri-Twins Arena and if you would like to take part you can contact the Bomber office at 204-687-4404.

Flin Flon Creighton Minor Ball is ready for another exciting season and will be hosting two in person registrations.

The first one is Sunday April 14th 1-4 at Creighton school. Use tennis quart entrance. There will also be registration on Tuesday April the 16th, 6-8 at the Sportex.

Season will start after the May long weekend.

Phantom Lake Soccer Registration will be taking place this week. There will be three opportunities to sign up in person.

Two post dated cheques, plus a cheque for fees will be required for registration.

You can also sign up on line at phantomlakesoccer.com.

Carson Lee competed at  under 19 Wrestling Nationals in Fredericton New Brunswick this past weekend and will be coming home with lots of hardware.

Carson won a Gold in Greco yesterday and a Gold in Freestyle on Friday. He also won an outstanding Male U19 Freestyle Wrestler Plaque and an award for 2018 Cadet Wrestler Of The Year.

A big congratulations from everyone in Flin Flon and good luck back on the world stage at his next big event in Romania in May.

Flin Flon/ Creighton Minor Ball is getting ready for the 2019 season and they need volunteers to join their board and help organize for the year.

They are looking for a Treasuer, Secretary, Fundraising Co-ordinator and Media C-ordinator. 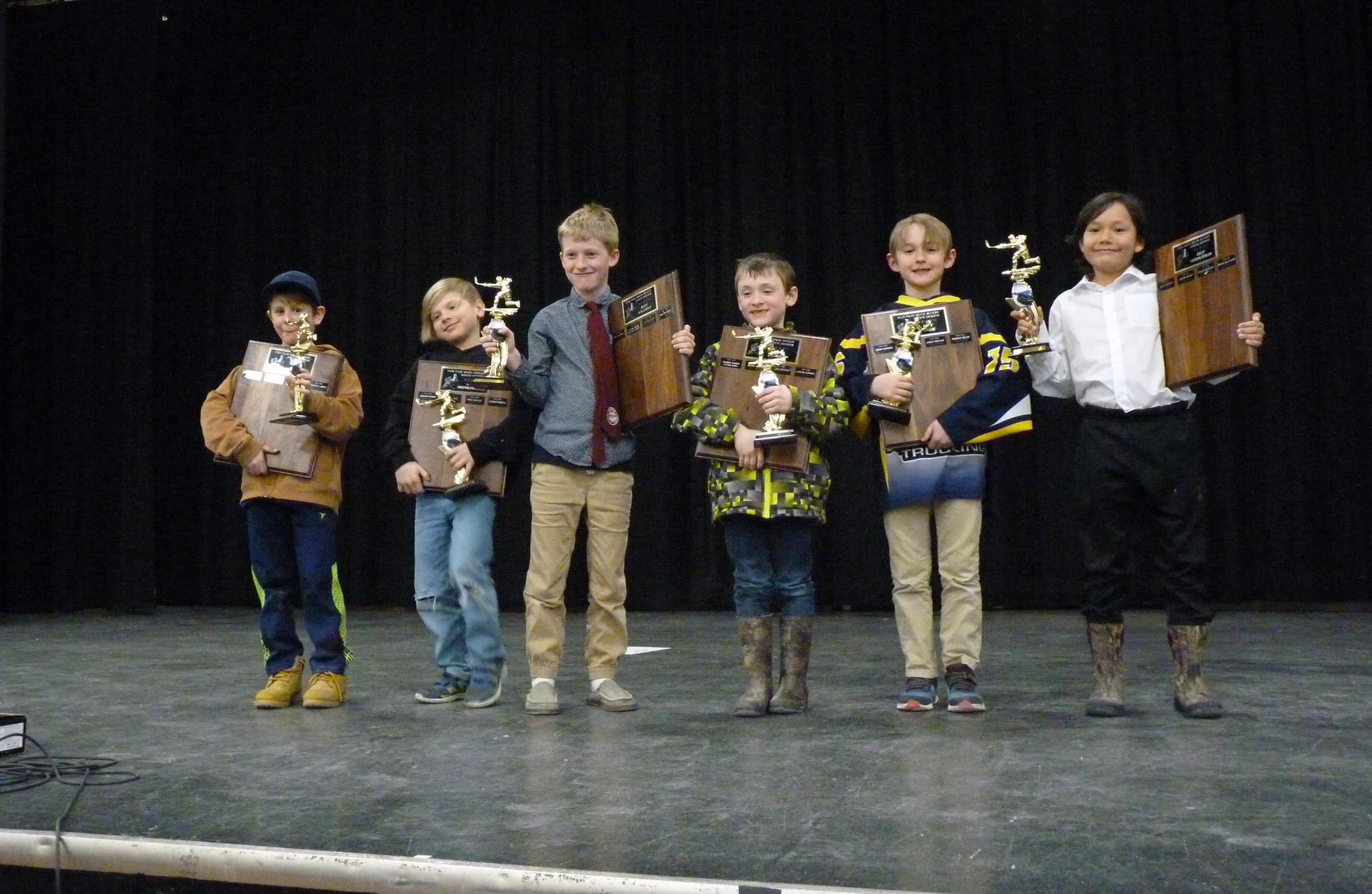 A big thanks to the sponsors Triad Realty, Scotia Bank and Chicken Chef for their support all season. 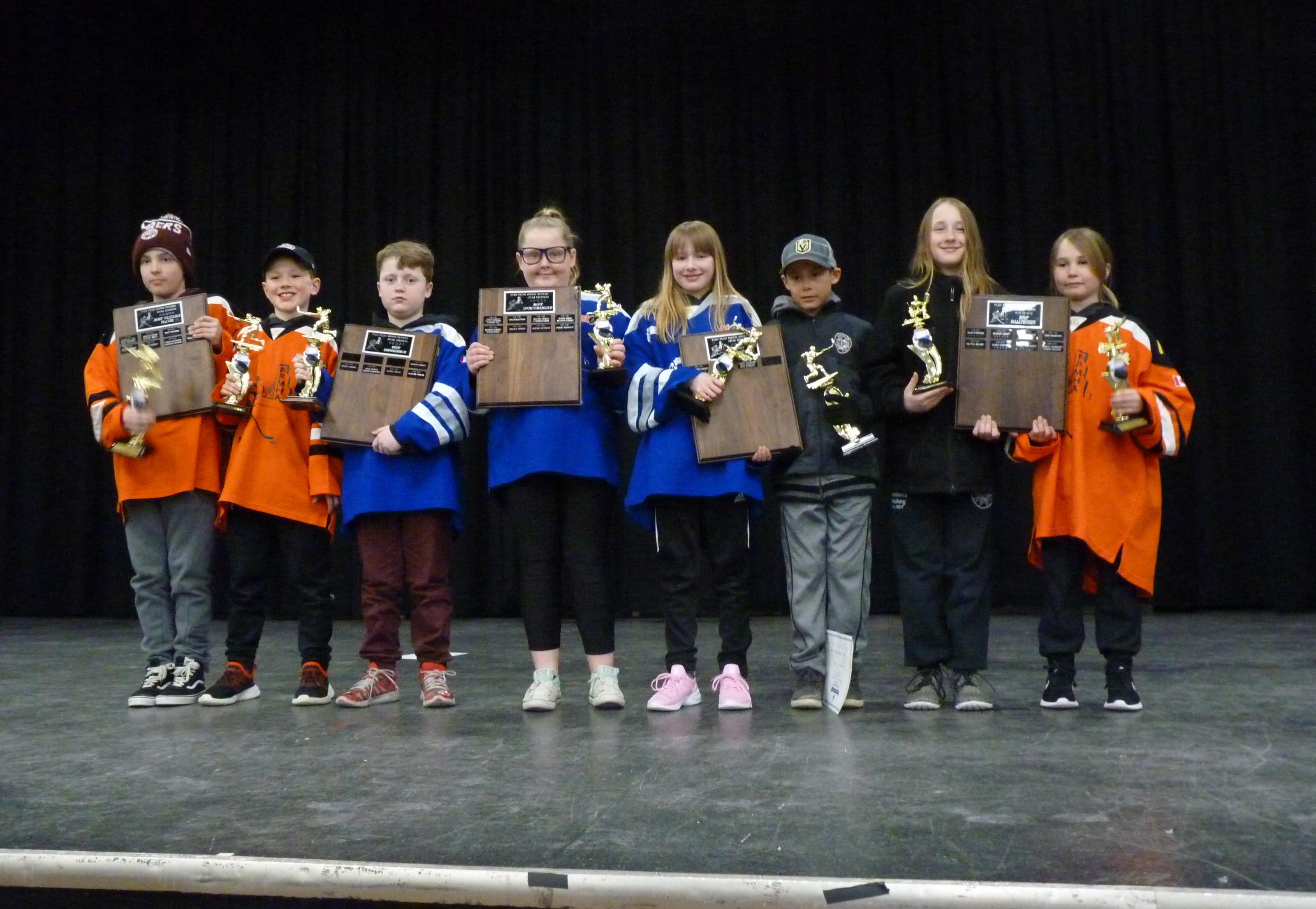 The Flin Flon Rotary Club is hosting the 5th annual Flinty Fishing Derby this Sunday starting at 11 and going til 2 at Bakers Narrows.

Last year's location was excellent as 30 fish from 4 different species were caught.

Tickets are $100.00 each and can be purchased at Kleen All in Flin Flon or Ruby's Outdoor's on the Creighton Freeway or online at flintyfishderby.com.

The Flinty Fish Derby is teaming up once again with the Bill Bannock Classic which will take place on Clear Water Lake this Saturday. 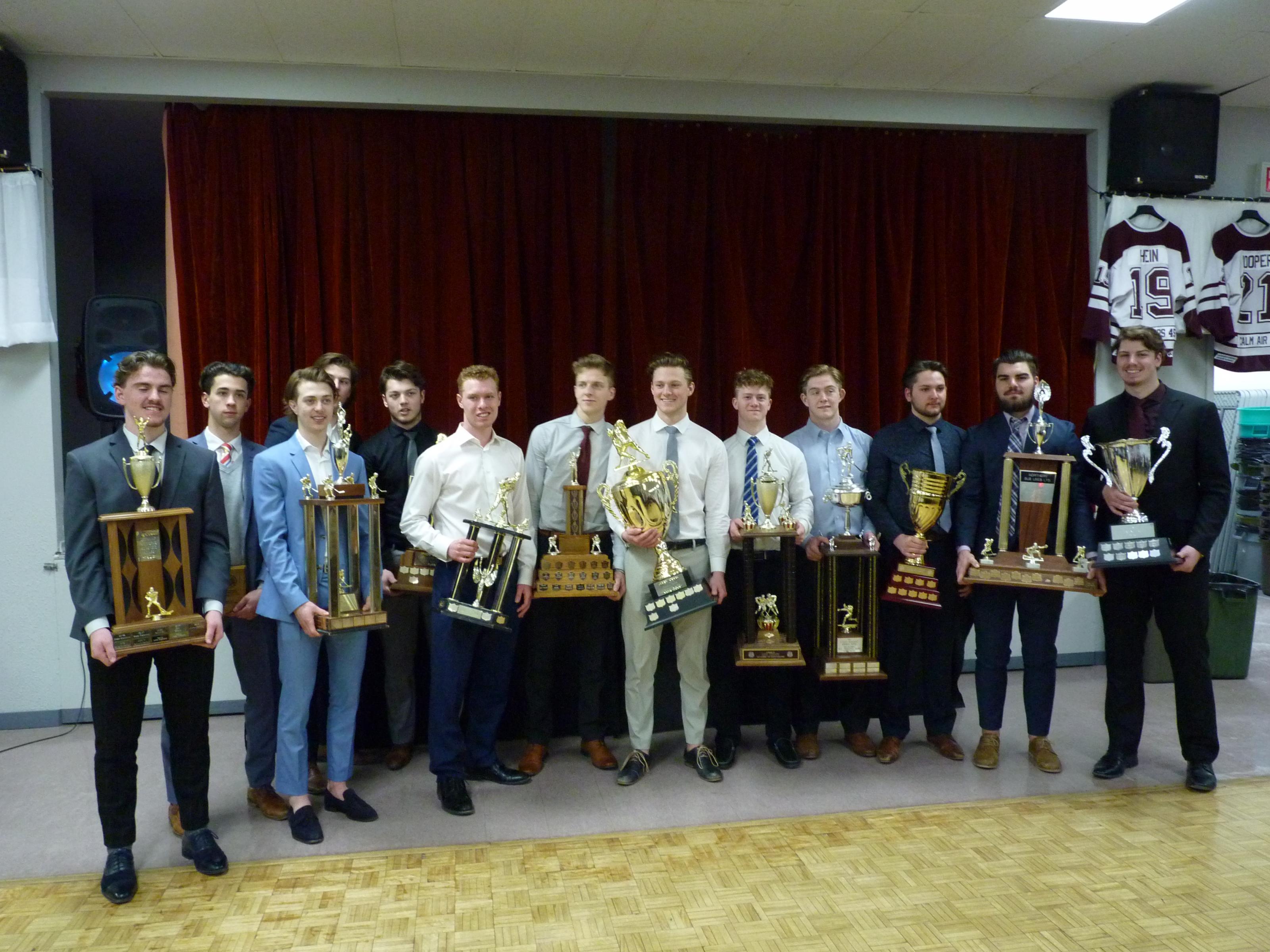 The Flin Flon Bombers hosted their year end awards and banquet Saturday night at the Creighton Community Hall with around 200 people in attendance.

A big thank you to Chicken Chef for preparing a delicious meal and to Leanna and the board for organizing and decorating the hall for the big event.

Bomber Captain,  Nate Hooper took home three awards including First Star for the RBC 3 Star Award and the George Leel Trophy for most points as well as the CFAR MVP.

Other award winners were :