31 Golfers teed off yesterday for the Ladies Open at the Phantom Lake Golf Course, with Laurie Salahub taking the Championship flight with a 79.

Here are the rest of the results:

The Phantom Lake Golf course is preparing for a very busy August including the Club Championship, Junior/Adult Tournament and the Senior's Open.

The Roller Goodwin Memorial hockey tournament is just a few weeks away as it makes it's return to the Whitney Forum the August long weekend.

Chudy VS The Dump Bears-10

Doughboys VS Kros Pros- 10am

L-Dub All Stars VS Crones- 4

The Dump Bears VS Donaghy-9am

L-Dub All Stars VS Firemen - 3

Due to all the rain this weekend the Phantom Lake Golf club has postponed the Ladies Open til this Sunday July the 29th.

Tee times will start at 1:30 and you will get 18 holes of golf with a Roast Beef supper and prizes to follow.

The Adult Junior Tournament has been moved to Sunday August the 19th starting at noon.


The Flin Flon Bombers made a trade to bolster their goaltending situation and unfortunately had to part with one of their core guys from the past couple of seasons.

Madarash who is also 20 played two years with the Bombers picking up 15 points in 61 career games. He also added 1 point in 15  playoff games. 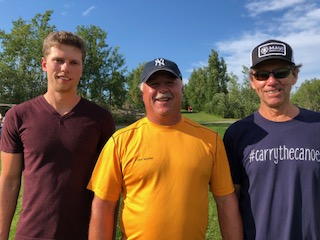 Congratulations to Flin Flon's Brett Muench who had the best shot in the semi-finals on Saturday to claim the 2018 CFAR Million Dollar Hole In One.

Muench had a number of shots hit the green, but his best shot measured 8 ft,3 and a half inches away to claim top prize.

Shawn Fraser came second at 10 ft, four and 3 quarter inches, followed by Rick Hall at 12 ft, nine and a half inches.

All three players got one shot to shoot for a million and Shawn Fraser came within 47 feet, Brett Muench 52 feet and Rick Hall 100 feet.

A big thanks to the Kinsmen and Rotary for spear heading the event as well as all the volunteers,sponsors and golfers for coming out to support the event.

Congratulations to the six golfers who scored hole in one's during the week including Jeff Boismier, Jason Mucha, Merle Sproxton, Laverne Hynzman, Casey Crone and Brenda Russell who picked up her third career hole in one, which is a record for the ladies.

More great events to look forward to at the Phantom Lake Golf Club. The Adult Junior Fun Day is set to go on Sunday August the 19th with tee times starting at noon.

Kids can enter for free and adults can play for only $25.00. There will be a barbecue and prizes to follow.

The Club Championship will be played on Sunday August the 12th starting at 10. This is open to members only and entry fee is $25.00.

You will get a barbecue and great prizes once again after the event is complete.

Cranberry Portage is only a few weeks away from their biggest event of the year as they prepare for the 29th annual Cranberry Portage Trout Challenge August the 4th and 5th on Lake Athapap.

This is a catch and release derby and entry fee is $150.00 with two people per boat.

The SJHL released the schedule for the up coming season on their website at sjhl.ca, with the season beginning on September the 12th when Nipawin travels to Humboldt to battle the Broncos on national tv.

The game will be broadcast on TSN and CTV.

All teams will play 58 games.

Flin Flon will open up the season on September the 14th and 15th with a home and home against Laronge. The Bombers travel to the Mel Hegland Uniplex in Laronge on Friday with the Wolves making their way to the Whitney Forum the next night.

The Bombers will kick off their first big road trip where they will play 4 games in 5 nights starting in Humboldt October the 10th, Notre Dame on the 11th , Weyburn the 13th and wrapping up in Estevan on the 14th.

The Bombers last regular season home game is March the 2nd VS Laronge, and they play in Melfort to close out the season March the 5th.

Full schedule can be seen at sjhl.ca, and 102.9 CFAR will post our broadcast schedule later in August.

If you would like to make sure you are ready for the up coming hockey season, sign up for off ice conditioning with Ryan Fox from Sal's Fitness.

Ryan will teach you speed, agility, power, core strength and flexibility. It doesn't matter your skill level as everyone will benefit from this conditioning clinic.

It is open to anyone between 10 and 20 and the sessions will take place at the Creighton Track Field starting July the 23rd.

It was a great weekend for a local Flin Flon swimmer. Madison Campbell was in Saskatoon for the Man/Sask Provincial Swimming Championships and was only one of two swimmers from all of Northern Manitoba to qualify.

Madison had a very good weekend making the finals for the 100 Butterfly, finishing 11th out of 150 girls. In the 5o Free event she finished 5th in the 11 year old category.

What makes this weekend even more impressive is that Madison made it to the finals in every event and the Flin Flon Aqua Jets have been done swimming for over 3 months.

The Flin Flon Nordic race team will be hosting a summer ski paddling conditioning camp starting this Friday. It is a great opportunity for anyone who would like to learn more about canoe racing and improve your fitness.

You can join top notch instructors including Rick Hall who brings all kinds of experience about the technical aspects of canoe racing. Other instructors include Bob Jarvis who is the co-coach of the Flin Flon Nordic team and Andrew Brisbin who is entering his third year as Saskatchewan's high performance coach.

You will also get to work with Brett Unrau who is a top skier in his own right and has been the Head coach of the Flin Flon Nordic team the last 9 years.

Fitness testing starts this Friday at 4 and the camp will wrap up Saturday night after strength and conditioning. You can register by e-mailing Dean Grove at bigisland5959@gmail .com or calling 204-923-0315.

The Early Bird Flin Flon Bomber season ticket deadline is this Thursday. Remember all tickets are $25.00 off including Adults, Students, Seniors and Children.

There is also the Family rate which will means if you buy one season ticket, a member of your family can also purchase one for $100.00 off.

There is also a payment plan in place and about 150 season tickets have been sold so far.

The Phantom Lake Golf Club will be hosting the Ladies Open on Sunday July the 21st with a shot gun start at 1PM.

The Phantom Lake Golf Club is also looking for volunteers to help out during the Million Dollar Hole In One, starting July the 17th.

The Cadet World Championships took place in Zagreb Croatia and Flin Flon's Carson Lee once again had a very impressive showing in Wrestling.

Lee ended up finishing 5th in the 80 KG weight class and improved signifigantly from his 21st place showing the year before.

Matter of fact Lee had the best showing by a Canadian male on the whole team.

Lee had victories over Greece and the Ivory Coast and ended up taking on Milan Koresog of Hungary for the Bronze Medal. The Hungarian did prevail but it didn't take away from a great event for Carson.

Lee who currently wrestles for the Saskatoon JR Huskies Wrestling Club will now move up from the Cadet to the Junior Level.

The Phantom Lake Golf Club hosted the Trout Festival Open this past Saturday. 45 golfers took part and battled a good down pour before completing their 18 holes.

When it was all said and done, Ray Shirran won the tournament firing a sizzling 68.

Shawn Goodman placed second and DJ Wilson third to round out the Championship Flight.

Don't forget the next Mixed 2-ball is Saturday July the 14th starting at 4 and the Senior's Open is scheduled for August the 15th.