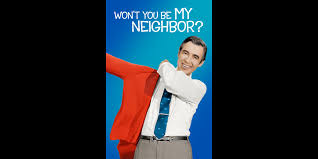 The Central Canada Film Group is featuring the film Won’t You Be My Neighbor tomorrow night as part of their Films You May Have Missed series.  The group’s Colin Davis explains it’s a film that takes an intimate look at everyone’s favorite neighbor Mr. Fred Rogers.  He says this brand new documentary takes us beyond the zip up cardigans and the land of make believe and into the heart of a creative genius adding you can see what Mr. Rogers neighborhood looked like behind the scenes as we look into the life of this man that we all felt we knew.

Wont’ You Be My Neighbor will be shown at the Hapnot Collegiate Theatre tomorrow night at 7:30 with free admission.

The group is also featuring another film about neighbors A Man Called Ove tonight at 7:30 at the Hapnot Theatre.  It’s a story about an angry old man’s reaction to a boisterous young family that moves next door. Because it’s a Toronto International Film Festival feature admission tonight is ten dollars.