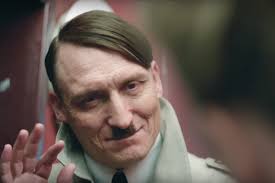 The Central Canada Film Group is presenting the film Look Who’s Back tomorrow night.  The groups Colin Davis says you’ll be surprised to see who’s back asking what would you do if you were walking down the street in Berlin and were met face to face with Adolf Hitler.  He says you would probably think that it is a character actor doing some sort of performance piece but in this film it is actually him.  Davis explains the film has a brilliant story line but the fun part is that it also features several unscripted vignettes of the actor who is playing Hitler interacting with ordinary Germans while in character.

Davis adds they showed this film in early February but they have heard from people who wanted to see it but were busy at the time so they decided to bring it back.  It will be shown tomorrow night at 7:30 in the Hapnot Collegiate theatre and admission is free.