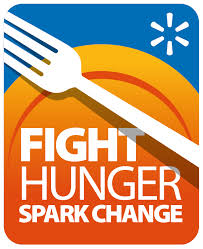 Walmart Canada has launched its second annual Fight Hunger Spark Change campaign which includes its Flin Flon store.  This is a national fund raising campaign calling on Canadians to join the fight against hunger.  The Campaign runs until May 2nd hoping to raise enough funds to secure ten million meals for Food Banks Canada and its network of more than 550 Food Banks including Flin Flon’s Lord’s Bounty Food Bank.

You can join the campaign by purchasing participating products from some of Canada’s largest food companies with vendors donating a portion of the proceeds, you can donate at the register until April 27th by rounding up your purchase to the nearest dollar with donations matched by Walmart Canada and non-perishable food items are being collected in a bin at the front of the store.