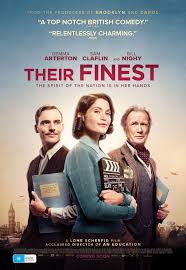 The Central Canada Film Groups Colin Davis says they are presenting the film Their Finest at the Hapnot Theatre tomorrow night.  He explains the film takes place in London during the Battle of Britain and the London blitz.  A film team working for the British Ministry of Information is making a morale boosting film about the Dunkirk evacuation.  He says the film follows Catrin Cole, a young script writer who goes to work for the Ministry and the filming of their feature which may not be the complete truth telling documentary that the Ministry has commissioned.

Davis adds if you have any fascination for World War Two, the Dunkirk evacuation or what life was like during these times you’ll want to come by the Hapnot Collegiate Theatre tomorrow night at 7:30 and because this is a film from the Toronto International Film Festival admission will be ten dollars.