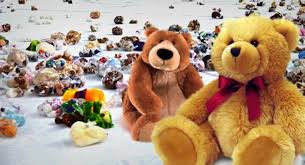 On December 2nd Northland Ford held their Teddy Bear Toss at the Flin Flon Bomber game.  Sales Consultant Doug Gourlay explains when the Bombers scored their first goal fans tossed Teddies over the boards.  He says there was a very enthusiastic crowd there and everything went great adding the Bombers scored a minute and a half into the game so they weren’t quite prepared for it but they collected a little over 230 in a combination of teddy bears and toys for the kids that all went to the Friendship Center last week and they’re going to distribute them in the area and there’s going to be a lot of very happy kids come Christmas.

This was the fifth year for the Teddy Bear Toss.