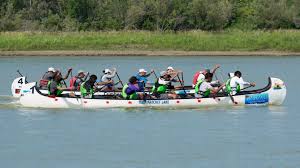 The 2017 Voyageurs Rendezvous Canoe Race was a Canada 150 Signature event that began in Rocky Mountain House, Alberta on July 1st.  It ended in The Pas area 23 days later.  Event Coordinator Cathy Schwengler says quite a few of the organizers of this race were paddlers in the Centennial Canoe Pageant which was the world’s longest canoe race held in 1967 covering 6280 kilometers.  She says this one was kind of inspired by the 100th anniversary race, it was a Canada 150 experience for everybody and all of their paddlers were Indigenous.  She says these guys were not only competing in an athletic race but they were ambassadors from their communities spreading a positive message for Indigenous people and Indigenous youth across the country.

The canoe teams paddled 16 hundred kilometers and visited 21 communities receiving a warm welcome from residents of the Opaskwayak Cree Nation at the finish.