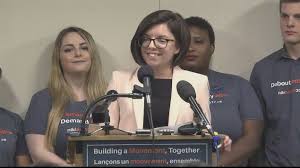 Churchill Keewatinook Aski MP Niki Ashton visited northern communities over the Canada Day weekend.  She says her second campaign for the NDP leadership is different this time and being from the north is helping her.  She explains we know about our own challenges here in the north in terms of job losses and potential job losses. She adds there’s other parts of the country that are hurting in the same way both in terms of the resource sector or other parts of our economy and people want to see real leadership and they’re not seeing that from Justin Trudeau and his government and are really responding to that is being put forward and she’s proud to come from a part of the country here in the north where we say it like it is and we fight back and that’s a message that’s clearly resonating in the leadership race.

The next major stop in Ashton’s campaign will be in Saskatoon on Tuesday where she will take part in the next leadership debate.