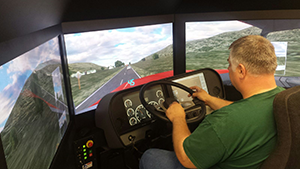 The Flin Flon School Board met Tuesday night and Assistant Superintendent Dean Grove reported the semi-truck simulation has been cancelled this year.  The driving simulator was well received in the past and the Division plans to bring it back.

The Division is recognizing kindness this week as Health, Seniors and Active Living Minister Kelvin Goertzen proclaimed May 7th to 13th Kindness Week in the province. Grove also made note of comments made by Theoren Fleury regarding the attentiveness of students at Hapnot Collegiate during his recent speaking engagement.  The Grade 8 band student’s recent trip to The Pas was a success as they received an impressive mark of 93 percent.  The Division also recognized the students who were recently in Winnipeg participating in the Red River Heritage Fair who were rewarded with the School Spirit Award.  The students won 250 dollars worth of books for the Library plus two years worth of tours at a Museum.  Grove stated this shows that great things are being accomplished all over by students from our Division.