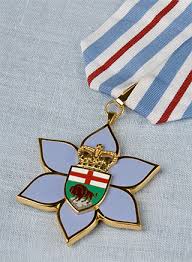 Individuals wishing to nominate deserving citizens for the Order of Manitoba have until January 31st to submit names for consideration for this year’s awards.  The Secretary for the Order of Manitoba Advisory Council Dwight MacAulay says each year up to twelve people receive the award.  He explains virtually anybody can be nominated who is living in Manitoba or has lived in Manitoba and has done something really quite exceptional for their profession, for their community, for the province or the country.  He adds the one thing people need to realize is that they do not accept posthumous nominations, that is the person you nominated has to be living.

For information or to make a nomination visit the Lieutenant Governor’s web site at www.manitobalg.ca or send it to Order of Manitoba care of the Manitoba Legislative Building, Winnipeg R3C 0V8.