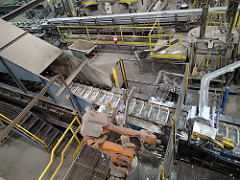 Hudbay staff and employees are meeting to discuss where the Company is going with the close of Triple Seven in 2019-20 and Reed Mine before that.  Director of Corporate Communications Scott Brubacher says they are looking at how to keep the Flin Flon Zinc Plant operating and save jobs.  He explains what they are trying to do over the coming year is figure our how do they maintain an economic and viable business in Manitoba and maintain the jobs that go with it because that’s what they want to do.  He says the fact is it’s just to early to say exactly what will happen or this or that will definitely happen as they’re at the beginning of the process so Hudbay will keep people informed about things as they move along and whenever there’s something to announce they’re committed to announcing it.

Brubacher says they have formed teams to look at ways to increase zinc volumes and cost reductions that could lead to a positive outcome.  He says Hudbay wants to secure the future as best they can under the circumstances with their intention of having the teams put a recommendation to management in 2018.