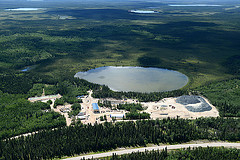 VMS Ventures has completed a seven hole exploration program. The areas targeted are located about 300 meteres to 2.3 kilometers from the operating Reed Mine between Flin Flon and Snow Lake which VMS owns 30 percent and Hudbay 70 percent and is the operator,

VMS Interim CEO and President John Roozendaal says the results from their first surface exploration drill program at the Reed Mine are encouraging.  He says three of the seven holes require follow up work based on favorable geology and borehole electromagnetic survey results to date.  He adds borehole geophysical surveys for two holes identified targets ahead of the holes but beyond the depth capacity of the drill so a follow up program is being considered but a decision won’t be made until all results from this drill program are received, analyzed and interpreted.