Posted About One Year Ago by Rob Hart 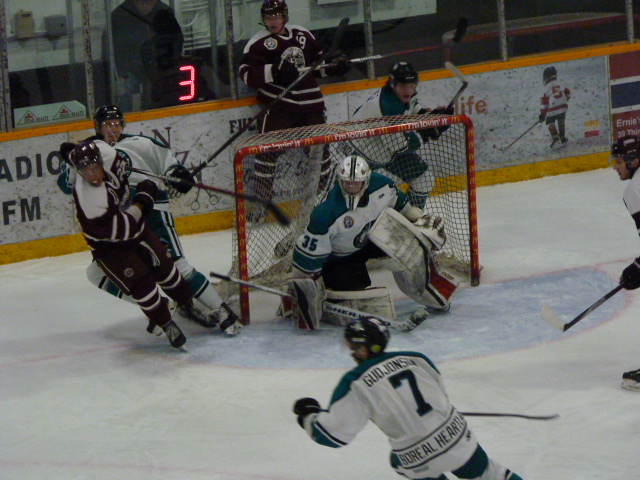 The Flin Flon Bombers will travel to Melfort tonight to play game 58 and wrap up the SJHL regular season. This is a make up game from January the 8th which was postponed due to bus problems.

Flin Flon, who have had second place wrapped up for a while, dropped a pair of games to the Laronge Ice Wolves on the weekend by scores of 4 to 3 and 4 to 3 in OT at the Whitney Forum on Saturday.

The Bombers did rest a lot of their veterans in the two games to get a little extra rest for the playoffs which will start on Friday.

You can't take anything away from Laronge who did play well both nights and are fighting for home ice advantage for their first round series.

Right now the Wolves hold down fourth overall with 72 points, but if Melfort beats Flin Flon tonight that would push Laronge down to 5th.

The Mustangs would grab third spot, with the Yorkton Terriers claiming fourth and Laronge would then take 5th.

It will be intersting to see what type of a lineup the Bombers decide to go with as it is a nothing game for them once again.

Saying that, you still want to go into the playoffs on a roll and Flin Flon is 4-4-2 in their last 10 and have been battling a nasty flu bug for the last few weeks.

Mike did indicate to me last week that he wanted to call up some ap's to get a look at the future and once again rest a number of his veteran players.

I am not sure if that has changed after this past weekend's results or not.

Win or lose,  the Bombers won't know their opponent until tomorrow when Humboldt travels to Melville.

If the Bronco's win,  then they will travel to Flin Flon Friday, and if the Mills pull the upset it will be Nipawin at the Whitney Forum on Friday night.

This has been one crazy year and in all my years covering this league, I don't remember it ever being this tight and not knowing any playoff match ups til literally the last game of the season.

Don't forget to catch tonight's game from Melfort  with the Great North GM Coach's Show at 7:10 and drop of the puck at 7:30.

We will also broadcast every single Bomber playoff game starting Friday at the Whitney Forum.