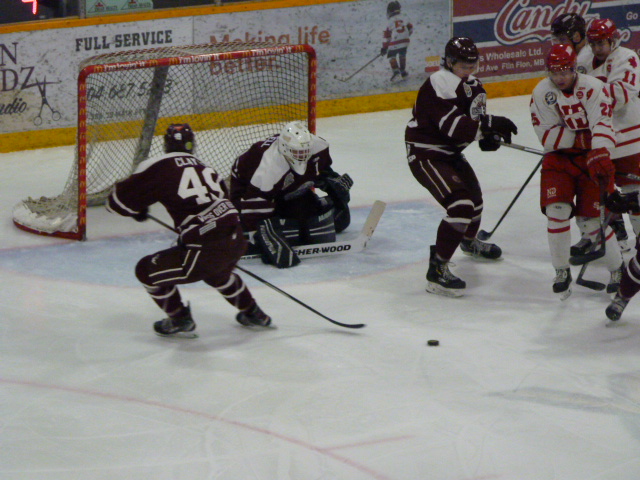 The Flin Flon Bombers shook off a couple of defensive mistakes in the first period and put together a solid second and third for a convincing 5 to 1 win over Notre Dame on Saturday night.

The two teams traded goals in the first with Adam Victorino sneaking a point shot past back up goalie Logan Dyck who played a very good game. There was all kinds of traffic in front of the Bomber net and Dyck never did see the shot.

Notre Dame got their only goal from Jarrett Penner who picked up a re-bound in front of the Bomber net and beat Cal Schell, for the Hounds only goal of the game.

The Bombers peppered the Hounds with 62 shots and Logan Dyck kept his team in it and was definately their best player.

Flin Flon ended up going 2 for 5 on the pp, with Notre Dame finishing up 0 for 4.

Friday night the Bombers lost to the Estevan Bruins in OT by a score of 5 to 4. What makes this loss really sting as the Maroon and White fought back from a 4 to 1 deficit.

It was still a decent weekend with the Bombers grabbing three points and improving their record to : 36-13-6 with just three games remaining in the regular season.

They will close out the season with a home and home with Laronge this weekend and a make up game in Melfort on Monday March 2nd.

These won't mean anything to the Bombers in the standings but are huge games for the Wolves and Mustangs who are still battling for playoff positioning.

All three games will be on 102.9 CFAR and flinflononline.com.