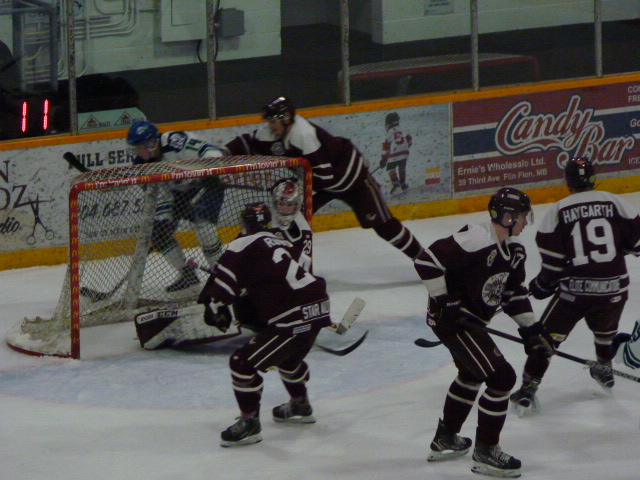 Matt Flodell scored just 2:16 into the opening period  and that proved to be the winning goal as the Bombers blasted the Melfort Mustangs 9 to 0 at the Whitney Forum on Saturday night.

Alec Malo collected his first ever SJHL hat-trick and Jacob Delorme turned away 29 shots for his first career shut out.

Delorme is in a groove and is still riding the wave of a 45 save performance against Laronge from the weekend before.

I was impressed with the way he was coming out to challenge shooters and his re-bound control was excellent. He has looked almost unbeatable in his last couple of starts.

Tanner Martin got the start for Melfort but was yanked after the first period where he gave up 3 goals on 14 shots.

Shawn Parkinson came in relief and was hung out to dry on many occasions giving up 6 goals on 34 shots.

Flin Flon was in the drivers seat pretty much the entire game and kept attacking the Mustangs all night long. This was nice to see as there have been a few occasions this year when Flin Flon has had the lead and took their foot off the gas pedal.

With the win,  the Bombers will give them selves a little more breathing room a top the Sherwood Division at 25-9-5, good for 55 points.

Melfort is 7 points back and both teams have played 39 games.

Next up for the Maroon and White will be a trip to the Cage on Friday to face the Nipawin Hawks.

Nipawin is red hot with 5 wins in a row including a weekend sweep of Laronge. The Hawks out scored the Wolves 15 to 3 in the two games.

We will have the broadcast including the Great North GM Coach's Show at 7:10 and drop of the puck at 7:30.