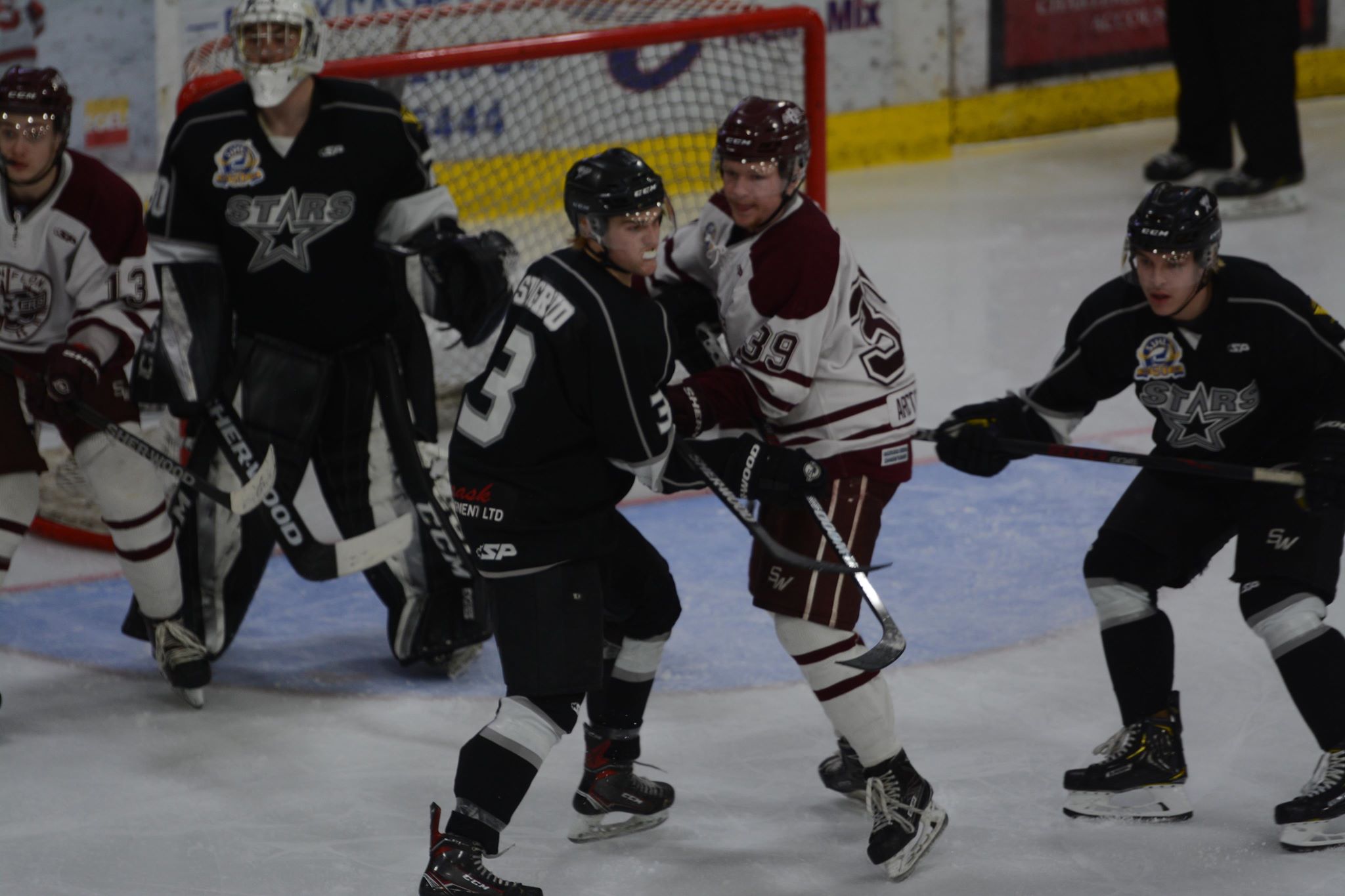 The Flin Flon Bombers return home to the Whitney Forum trailing their best of 7 SJHL Quarter Final against the Battleford Stars 2 games to none.

The Stars took both games at the Civic Centre 3-0 and 2-1 in OT last night as the two teams prepare for game's three and four this Tuesday and Wednesday at the Whitney Forum.

After getting shut out in game one, I thought Flin Flon was the better team last night and deserved a lot better result. After Braydon Buziak opened up the scoring on a nice individual effort in the first period, Caleb Franklin fired home his second of the post season to tie the game at one mid-way through the middle frame.

Cade Kowalski feathered a beautiful pass from behind the net and Franklin fired a perfect shot over Joel Grzybowski's left shoulder to tie the game and give the Bomber bench a much needed lift.

This was the first puck to beat Grzybowski who saw his shut out streak stopped at just over 90 minutes. He has been tough to beat and looks very confident and you get the feeling it is going to take a perfect shot to beat him.

The two club's couldn't decide it in the third so we would hit OT for the first time in the post season.

A tough call against Calvon Boots for high sticking and the Stars would score the first power play goal of the series when Kaden Boser picked up a loose puck in the neautral zone and skated across the Bomber line and fired a top shelf shot past Gabriel Waked.

Waked seemed to be caught off guard by the shot,  but he was very good in this game and just made a save off Elijah Loon Stewardson who was left alone on front of the net just moments before.

The two goalies stole the show with Grzybowski making 42 saves on 43 shots and Waked wound up with 33 saves on 35 shots. Both teams have struggled on the power play with the Bombers 0 for 6 and the Stars 1 for 6.

Funny how things go as the first power play goal of the series ends up being the game winner.

Not to take anything away from Grzybowski who has been a big factor in the first two games, but Flin Flon needs to find a way to get in more tight with better chances.

A number of the Bomber players have told me that they don't feel they have really tested him. You also have to give the Stars defense credit who are doing a good job keeping the Bombers to the outside, who have been shooting a lot from the perimeter.

Hopefully some home cooking will do the trick for Flin Flon who need a win on Tuesday to give them selves any chance of getting back in this series. You don't want to go down 3-0 to any team, but especially the Stars who have been really rolling the last several weeks.

One of the challenges for the Maroon and White will be to try and score first. Flin Flon has yet to lead in either game and have given up at least one goal in 5 of the 7 periods.

I expect the Bombers to open the tank and look forward to the atmosphere the league's best fans can provide this Tuesday and Wednesday.

Don't forget to bring your mobile devices and tell anyone who can't be there to listen in to 102.9 CFAR and flinflononline.com as we will hit the air both nights with the Great North GM Coach's Show at 8:10.