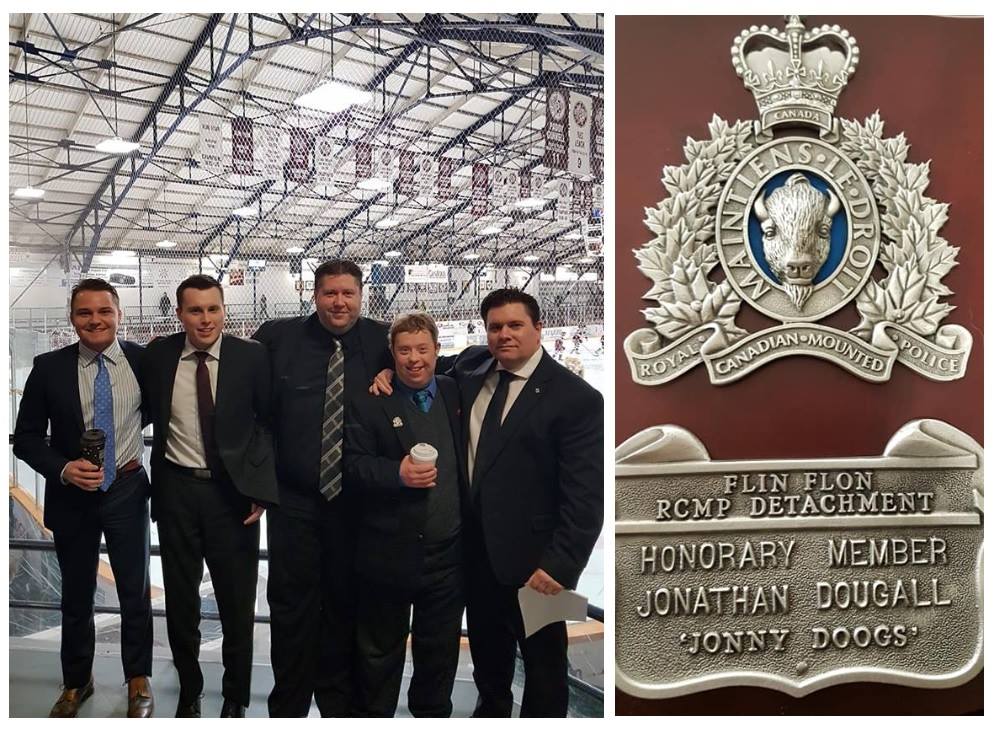 One goal was all it took for the Flin Flon Bombers to pick up their 17th win of the season as they blanked the Estevan Bruins 1-0 Friday night at the Whitney Forum.

Tyler Higgins who was just picked up from the QMJHL made his presence felt in his Bomber debut, snapping a shot from the point low blocker side on Grant Boldt for the only goal of the night.

Higgins,  who is a very impressive physical specimen at 6 ft 5 should be fun to watch in a Bomber uniform for the rest of the season. I interviewed Higgins in the first intermission and he told me he is thrilled to be in Flin Flon and appreciates the team's rich history.

The two best players on the ice were the two goaltenders who put on a show for their respective clubs.

Grant Boldt made a lot of highlight reel saves for the Bruins and ended up making 30 saves on 31 shots. Not to be out done, Pierce Diamond was rock solid in making 24 saves for his second career SJHL shut out.

This was an important win for Flin Flon who improve to 17-8-0-2 and are within 5 points of second place Melfort with 2 games in hand. The Mustangs have dropped two in a row to Yorkton and Estevan.

Nipawin has climbed into first place with 43 points and the Bombers will travel to the Cage Tuesday night looking for their first win of the year against the Hawks.

The Bombers are 7 points behind with 3 games in hand.

Estevan surprised Melfort 4-3 on Saturday and end up going 2-1 on their Northern road trip. They are 15-17-1 and are 2 points behind Yorkton for first in the Viterra Division.

It was a very special night for the entire Bomber organization as long time fan and supporter Jonathan Dougall was honored before the game.

Jonhy was presented with an autographed Bobby Clarke Bomber jersey and a plaque from the RCMP for his contributions in the community.

Jonhy also got to be a guest coach on the Bomber bench and dropped the puck before a standing ovation.

It was first class all the way on behalf of the Flin Flon Bomber organization.

Besides acquiring Higgins from the QMJHL, Flin Flon did make another move in dealing 20 year old d-man Doug Johnson to Steinbach of the MJHL.

The Bombers were maxed at 20 year old's which made Johnson available. Mike Reagan commented that it was difficult to see Doug go who was very committed to being a Bomber.

This is a big week for the Maroon and White, who head to the Cage tomorrow to face the first place team in the Sherwood Division, the Nipawin Hawks. Nipawin has taken all 3 meetings this year.

We will have the broadcast on 102.9 CFAR and flinflononline.com including the Great North GM Coach's Show at 7:10 and drop of the puck at 7:30. It doesn't get any easier with the second place overall Humboldt Broncos coming to town for a pair of games this weekend, Friday and Saturday.