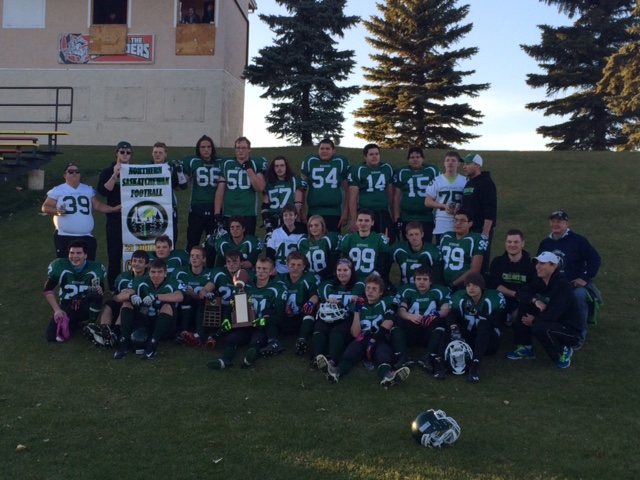 The Creighton Kodiaks travelled to Prince Albert this past Saturday and defeated the Churchill Chargers out of Laronge to capture their second straight Ralph Pilz trophy.

A 28 yard Dean Rainville field goal is all the offense the Kodiaks would need as they would  also add a second half Chris Reynolds touchdown to pick up the 9-0 victory.

Raiville kicked the field goal late in the first quarter and that would be the only scoring play until Reynolds took the handoff from Pietsch with just over 5 minutes remaining in the fourth quarter.

It was a battle of the defense's with neither team able to get a pass attack going. The Kodiaks who normally win the turn over battle lost the ball 3 times while Churchill turned it over 5 times.

Neither defense allowed a completed pass for more than 15 yards.

It was a perfect day weather wize  in Prince Albert with lots of fans from Creighton and Flin Flon making the trip to watch the Kodiaks remain undefeated and pick up their second straight Northern Saskatchewan Championship.

This is what head coach Ryan Karakochuk had to say after his team's victory on Saturday.

" That was a hard one, a battle right til the end. Our defense played awesome and we just shut them down. Our offense kept grinding it out and then Chris ran that one back at the end to give us a 9-0 lead, it felt really good. I believe our defense is the best in the North and that is what is going to keep us going."

Chris Reynolds talks about his touchdown.

" There was a fake pitch to Brandon Van Meer and I was out there to take the hand off and I was hoping to get the first down, wasn't expecting to score, but I broke free and went all the way."

The Kodiaks will now compete against the rest of the province and are expected to host Birch Hills this weekend. We will confirm that later this week.

Congratulations to all the coach's Ryan Karakochuk, Jason Straille,John Clark,Ryan Biberdorf, Chad Trumbley and Riley Reynolds and all the players for another season to remember.