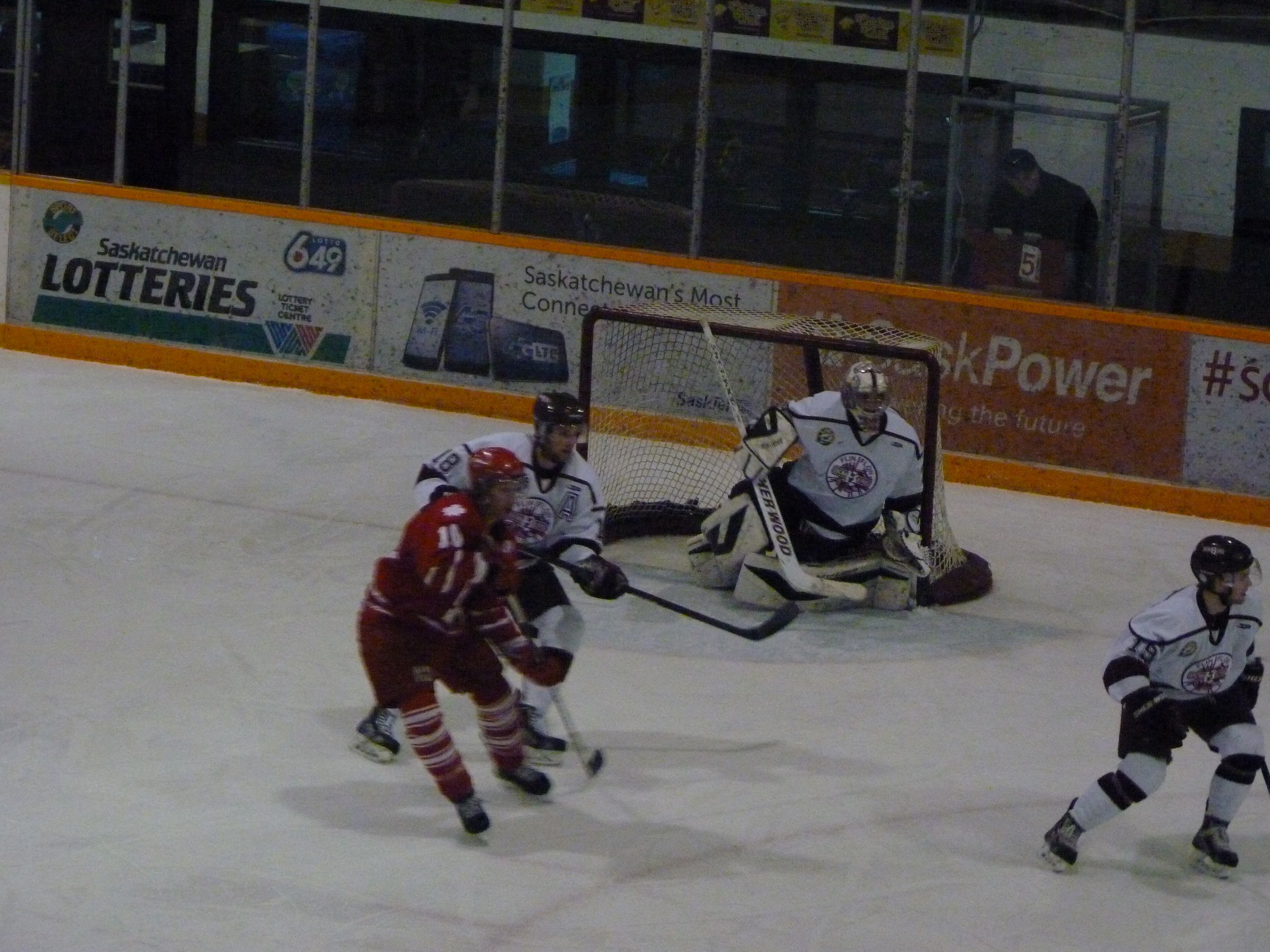 It is simple,  win tonight or the Bombers season is over. The Notre Dame Hounds make their way to the Whitney Forum tonight with a 3-2 lead in the series and a chance to wrap it all up.

The Kindersley Klippers will be watching this game with interest ,  hoping the Bombers can knock off the Hounds and get it to a game 7 in Wilcox Tuesday night. Kindersley gets the winner and will be well rested after sweeping Battleford on Wednesday.

Flin Flon looked good early in game 5, but could not hold on to the lead. Tyler Bell got the Bombers on the board, firing a slapshot by Alexi Thibaudeau to put the Bombers up 1-0.

Spencer Trapp went to work scoring a couple of powerplay goals to put Notre Dame up 2-1 late in the first. The Bombers caught a big break when Brett Kit would re-direct a a Danis Chartrand shot to tie the game with only 2 secondsleft in the period.

Kristian St.Onge then put the Bombers up 3-2 mid way through the second,  and the Maroon and White looked like they were in good shape and might get back home ice advantage.

The wheels slowly came off and Notre Dame, reeled off 4 straight goals to take game 5 , 6-3, and are now in the drivers seat leading 3 games to 2.

Flin Flon needs to find a way to stop Notre Dame's 2 big defensemen Austin Lightfoot and Spencer Trapp, who have 17 points between them. Trapp did most of the damage in game 5 picking up the hat trick and 1 assist.

Jared Martin and Carter Hikichi have been the Hounds top forwards picking up 16 points between them.

The Bombers are being led by: Brett Boehm who has 7 points 1 goal and 6 helpers, while Parker Evans-Campbell and Chris Rauckman have 6 points each. Even Though Boehm is leading the way with 7 points, you have the sense that he could break out at any time with a really big game and the Bombers are hoping that  it's  tonight.

Austin Calladine went down hard on Friday and had to leave the game. Mike Reagan has confirmed that he is ok and will play tonight. Robbie Cameron is also expected to back tonight after suffering from the flew.

Notre Dame has a couple of key injuries including one of their top snipers from the regular season, Ian Williams who has not suited up for any of the playoffs. He is not expected to play at all against the Bombers but might be available if Notre Dame moves on.

Andrew Cummings went down in game 3 and is not in the lineup tonight.

Specialty teams have been a big part of the series so far, with both teams having success with the man advantage. Notre Dame who had the tenth best pp in the regular season are no.1 in the playoffs clicking at 34.8 %

The Bombers who were no.1 in the regular season are sitting fourth in the playoffs at 26.9 %. If Flin Flon could of converted on a 5 on 3 in game 5, the game may have had a different out come. Rauckman also had a good chance to score short handed early in the first period, but was denied by Thibaudeau.

The story for Flin Flon in this series has been missed opportunities, and can not afford to miss many more or they could be on the outside looking in very soon.

Mike Reagan's crew have been able to respond from losses all season, and have done it twice in this series already and are looking forward to getting back to the Whitney for game 6 tonight.