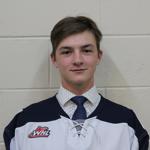 Congratulations to Flin Flon's Magnus Pearson who has signed with the Thunder Bay North Stars of the SIJHL for the up coming season.

Magnus played two seasons for the Norman Northstars where he put up 24 points in 48 games including 11 goals.

Pearson recently suited up for the OCN Storm of the KJHL where put up really good numbers including 19 points in just 9 games with 9 goals.

Thunder Bay lost out to the Kam River Fighting Walleye in the SIJHL Semi- Finals a few weeks ago.