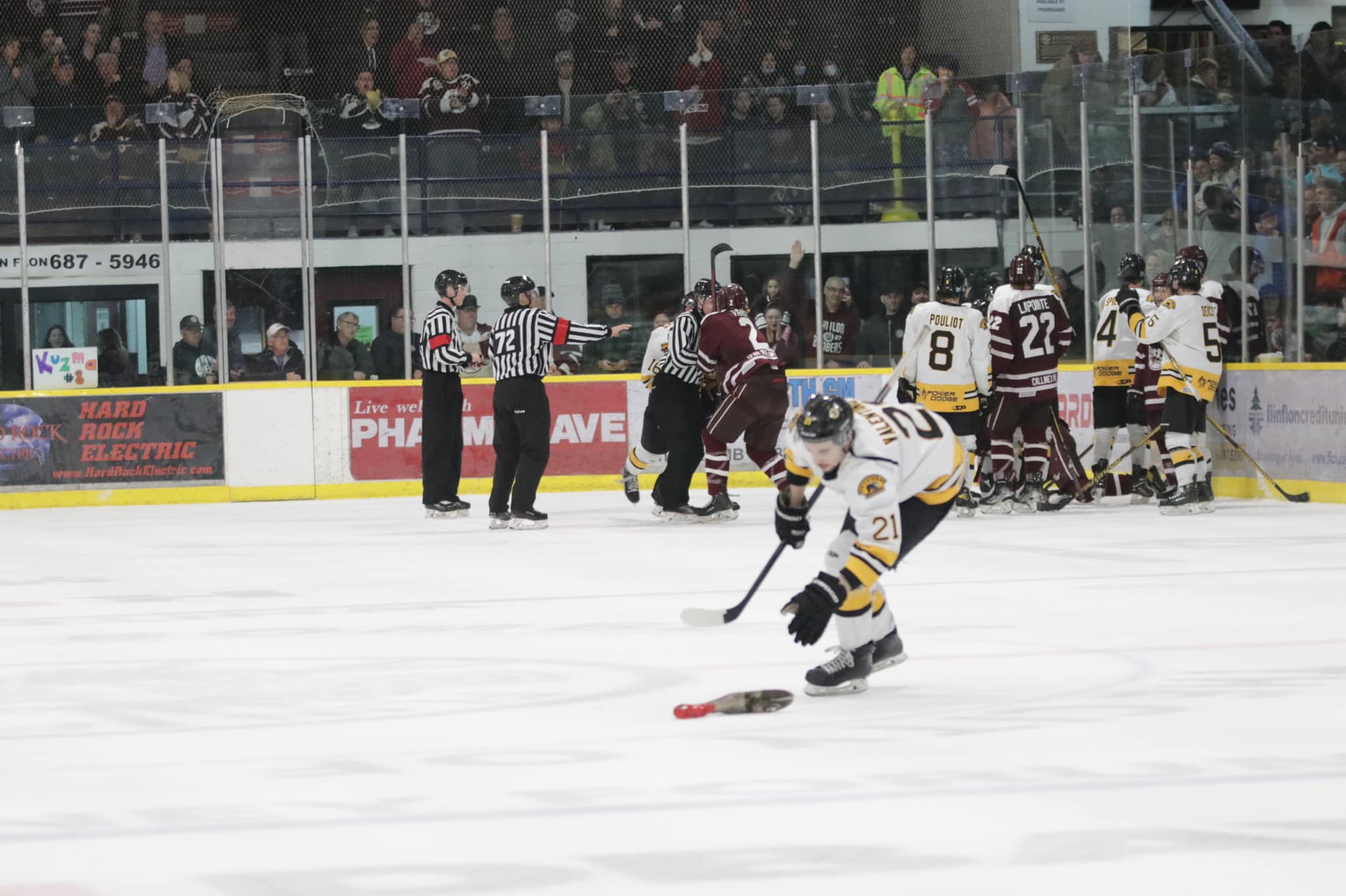 The Flin Flon Bombers were once again able to rise to the occasion in front of a spirited and large crowd at the Whitney Forum last night in game 3 of the Canalta Cup Final.

In a game they absolutely had to have,  the Bombers pulled out a gutsy 4 to 3 win and now trail the best of 7 league final 2 games to 1.

Brett Wieschorster scored on the power play with just 58 seconds left in regulation to score one of the biggest goals of his career.

Flin Flon had a 3 to 1 lead but the very talented Bruins fought hard to tie the game mid way through the third  on a goal from Kade Runke his 6th of the playoffs.

It looked like the game was headed to OT for the first time in the series but the Bombers were able to score their first specialty team goal of the final.

Flin Flon wound up 1 for 6 with the extra attacker while Estevan was 1 for 5.

The other Bomber goals came from Drew Kuzma (7), Jaeden Mercier (3) and captain Zac Smith who collected his third of the series and 6th of the playoffs.

The Other Bruin goals were scored by the big duo of Mark Rumsey (7) and Olivier Pouliot (9) who have combined for 34 points so far this post season.

They sit first and second in overall playoff scoring.

Gabriel Shipper continues to lead the Bombers with 12 points in 14 games.

The goalies once again took centre stage with many highlight reel saves between them as Bilous kicked out 24  while Cal Schell was called upon 31 times.

This was by far the most intense game of the series and things were getting pretty heated at various times in the game including a shouting  match between the two coach's after the first period.

It looked like we may see a big donnybrook when Jamie Valentino thought it would be a good idea to grab the moose leg and skate off the ice with it.

As the Bombers celebrated, Valentino grabbed the Moose leg and was followed down the ice by a number of Bombers including Matt Raymond who was able to get it back.

This very well could be the motivation that the Bombers needed to take command in the series. We saw what happened to Weyburn when they tried the same thing a number of years back and they haven't won a playoff series since.

Many fans were coming unglued as that is something you don't fool around with at the Whitney Forum. It is a huge tradition and has been a staple of Bomber games for decades.

Looking forward to game 4 tonight and hoping for 2000 plus at the Whitney Forum for the first time in over 20 years.

Join us for all the action tonight with Creighton Furniture Flin Flon Bomber Playoff Hockey at 7:30 and the Great North GM Coach's Show at 7:10.