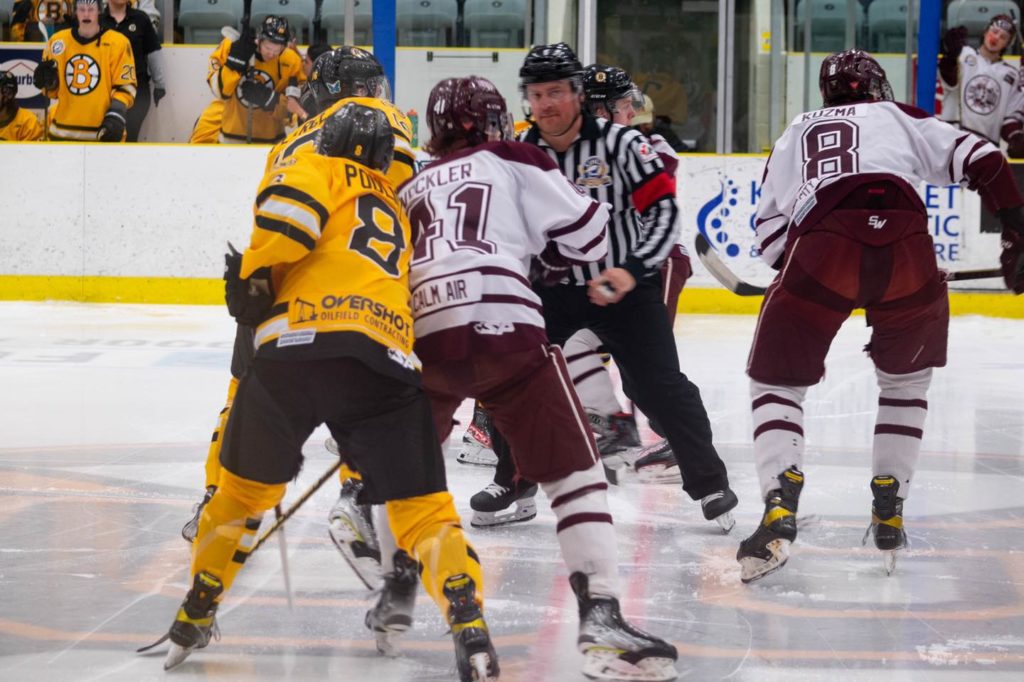 The Bombers will return to the friendly confines of the Whitney Forum after dropping the first two games of the SJHL Canalta Cup Final in Estevan.

The Bruins took the first two this past weekend in Estevan by scores of 4 to 2 and 2-0.

On Friday,  the Bombers matched the Bruins chance for chance but had a tough time beating Bruins netminder Boston Bilous who was sensational in both games.

Bilous made 25 saves including some highlight reel ones on Jacob Vockler and Zac Smith. Vockler looked like he had him on a wrap around, but Bilous was able to get the left pad down to make an incredible save.

Bomber Captain Zac Smith was able to beat the Bruin veteran goalie early in the second,  when Bilous  collided with Gabriel Shipper at the side of the net, and Smith was alone out front to shovel in the loose puck.

Smith also connected on  a nice feed in front of the Bruins goal late in the third to get the Bombers within a goal at 3 to 2 with just over 2 minutes left in regulation.

Estevan would seel it with an empty netter courtesy of Cody Davis with just a few seconds left and took the opener 4 to 2. The other Bruin goals were scored by Eric Houk, Dayton Deics and Caelan Fitzpatrick.

Saturday's game was delayed due  to a major storm in the Estevan area that knocked the power off at Afffinity Place and the game started an hour late.

With just over a minute remaining in the first period, the power went out again resulting in another stoppage. This one didn't last long and they did get things up and running about 15 minutes later.

I don't know if it was the delays or not but the Bombers came out flat and didn't have a very good first period being out shot 14 to 7.

Cal Schell kept them in the game and made a lot of highlight reel saves himself especially early in the game.

Olivier Pouliot was the difference maker on Saturday as he scored both the Estevan goals for a 2-0 victory.

The game winner was scored just over a minute into the second period when he fired a shot from inside the blue line that rattled off the post behind Cal Schell who I don't think saw the shot.

That would stand up til late in the third when Pouliot would hit the empty net with only 25 seconds remaining in the game. Pouliot continues to be the top points producer in the playoffs with 19 points including 8 goals.

Boston Bilous stopped all 26 shots fired in his direction and held off a late Bomber charge in the third. Jacob Vockler had a great chance on a clear cut  break away but Bilous made a great glove save.

Cal Schell kept his team in the game making 28 saves and was the best Bomber.

Estevan did what they had to do and lead the SJHL Canalta Cup Final 2 games to none with the series shifting to Northern Manitoba and the Whitney Forum for games 3 and 4, Tuesday and Wednesday.

We will need the full support of the fans once again with  what is now a must win for Tuesday. Flin Flon can not go down 3 games to none to a veteran Estevan team.

The fan support turned around the Battleford series and here is hoping for lightning in a bottle once again.

Don't forget to bring your radios and mobile devices to the rink both nights for Creighton Furniture Flin Flon Bomber Playoff Hockey including the Great North GM Coach's Show at 7:15.