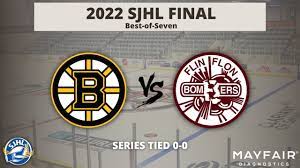 The Canalta Cup Final is now just a few days away as the Flin Flon Bombers will be in search of their first league title since 1993. This will be the Bombers first  trip to the final since 2017.

Their opponent,  the Estevan Bruins will be trying for their first Championship since 1999.

The Final will start at beautiful Affinity Place this Friday.

Here is the complete schedule of games which will all be broadcast on 102.9 CFAR and flinflononline.com. We are on the air 15 minutes before each face off with the Great North GM Coach's Show.