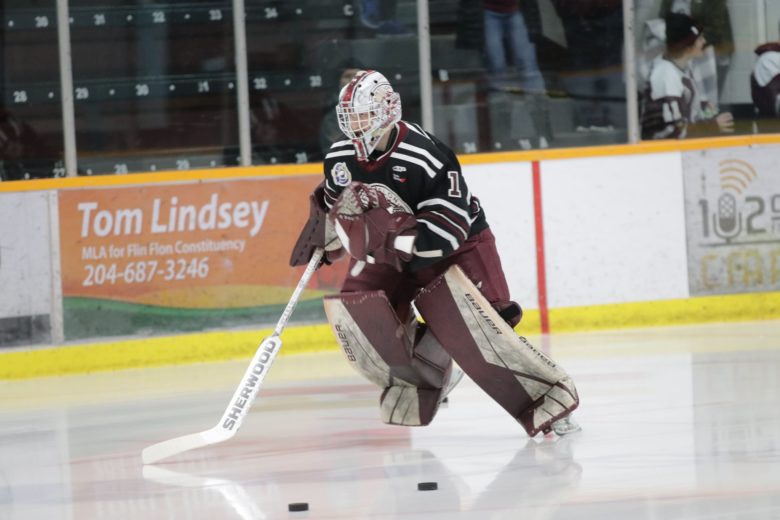 The Flin Flon Bombers have punched their ticket to the Canalta Cup Final against the Estevan Bruins after  a 1-0 win in Humboldt last night.

Jacob Vockler scored his 5th of the playoffs 14:16 into the opening period on the Power Play and it held up as the game winner.

Cole Vardy shot the puck from the corner and it hit Vockler's leg and went in the net fooling Rayce Ramsay. This was Vockler's fourth game winner of the post season and the  biggest goal of his career.

Both goalies were steller and stole the show once again.

Cal Schell performed an absolute  master piece which saw him stop all 37 shots and he picked up his second shut out of the playoffs.

I also have to give credit to the Bombers defense who did an outstanding job keeping the top Bronco offensive players at bay and not allowing them to get a lot of room.

Last night in particular, the Bombers did a really good job keeping everyone to the outside and Cal Schell was able to see every shot.

Flin Flon wins the best of seven  4 games to 1 and after dropping the first two games in North Battleford have rattled off 8 wins in their last 9 games.

The team is playing with lots of confidence and are getting contributions from everyone.

This is the Bombers third trip to the finals in the last 5 years that we have had games and first trip since 2017. We all remember the loaded team they had in 2020 when the season ended abruptly due to Covid 19.

They feel they are a team of destiny.

The league final will feature two teams with the richest traditions that have a history that dates back to the WCHL in the 60's and 70's.

Estevan is the number one seed that had 91 points this year and are also the hosts of the 2022 Centennial Cup. That means the Bombers will alo punch their ticket to the National Championship  with the Bruins being the host team.

Both these clubs are searching for their first Championship since the 90's with Flin Flon last winning in 92-93 with their epic win over Melville.

The Bruins last Championsip came in 99 with a win over Humboldt.

The Canalta Cup Final will begin one week from this Friday April the 22nd in Estevan and the Centennial Cup will start on May the 20th.

Don't forget to follow all the Bomber playoff action on 102.9 CFAR and flinflononline.com courtesy of Creighton Furniture.