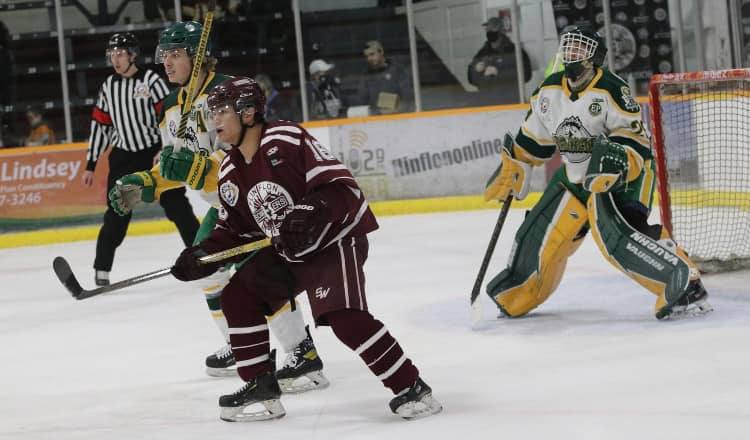 The Humboldt Bronco's managed to stave off elimination with a hard fought 3 to 2 OT win at the Whitney Forum on Saturday.

The Flin Flon Bombers had taken a commanding 3-0 series lead thanks to a 1-0 win on home ice on Friday.

Matt Raymond had the only goal when he deposited a beautiful feed from Jacob Vockler late in the first period to the delight of a packed Whitney Forum once again.

Both goalies were fantastik with Cal Schell making 33 saves for his first ever SJHL playoff shut out. Rayce Ramsay stopped 39 out of 40 and was the Broncos best player.

Saturday, with their backs against the wall Humboldt played their best game of the series and scored the first goal of the game for the first time in the four games.

Lucas Ceccarelli deflected a shot from the blue line for his third of the post season to open the scoring in the first. Matthew Perkins finally scored his first of the playoffs,  when he jumped on a loose puck in front of the Bomber net to make it 2-0 early in the second.

Flin Flon was able to shake off a rough start and got back into the game when " MR SPRING" Drew Kuzma banked a shot in past Rayce Ramsay from behind the net.

This was Kuzma's 6th of the playoffs and he leads the team in goals in the post season.

It looked like Humboldt was going to be able to hang on for the 2 to 1win but with only 5 seconds left in regulation, Xavier Lapointe was able to find Jaeden Mercier alone in front of the net.

Lapointe was flying through the Broncos zone and managed to get all 5 broncos to follow him to the right corner,  when he was able to slide the puck out front to a wide open Mercier.

Mercier scored his second of the playoffs and I thought the roof was going to come off with the massive celebration with  horns and sirens blaring all over the place.

So we would get OT for the second time in the series, but with a different result this time.

It didn't take long for the Broncos to win it as their captain Kade Olson grabbed a Bomber turn over and raced across the line firing a shot top corner to beat Cal Schell.

I give Humboldt credit who found a way to get it done with their best effort of the series that resulted with  the 3 to 2 OT win. The Bombers are still in good shape with a 3 to 1 series lead.

The two teams will once again switch venues as game 5 will make it's way to the Elgar Petersen Arena in Humboldt  Tuesday night.

Join us for all the action once again with Creighton Furniture Flin Flon Bomber Playoff Hockey including the Great North GM Coach's Show at 8:10 and drop of the puck 8:30 MB time.