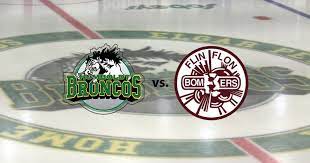 It is off to the final four with the SJHL Semi- Finals set to begin tomorrow.

The Flin Flon Bombers will face the Humboldt Broncos for the second time in three years after their four game sweep back in 2020.

It looked like the Bombers may be on their way to their first league title since 1993, but the bottom fell out around the world with the Covid pandemic and the rest of the playoffs were cancelled.

No question that Flin Flon has rediscovered their mojo and seem to have battled out of their funk which saw them lose 8 of their last 11 heading into the post season.

After losing the first two games to Battleford in the SJHL Quarter Final, something dramatically changed. The fans showed up in droves at the Whitney Forum and the building was absolutely electric.

I haven't seen it like this since the RBC in 2001 and Head Coach and GM Mike Reagan said the fans support definately turned the series around for his club.

Flin Flon reeled off four straight wins including the series clincher on Sunday night 6 to 2.

Gabriel Shipper, Jacob Vockler and Brett Wieschorster all led the way offensively with 4 goals a piece.

Cal Schell rebounded after a tough start and only gave up 5 goals in the last 3 games.

The Humboldt Broncos also needed 6 games to eliminate the Laronge Ice Wolves and struggled early in the series.

Laronge won two of the first three and appeared to be on their way to winning game 4 with a early 3 to 0 lead. The Wolves got into penalty trouble and the mighty Bronco power play made them pay and turned around the series.

The Broncos won the next three out scoring Laronge 16 to 8.

The Bombers won the regular  season series going 2-1-1 head to head with the Broncos, but they will be the under dog in this play off  match up.

They have not played since December the 4th.

Humboldt can score and were second over all in goals for with 249. Only Estevan scored more with 262. The Bombers were 5th over all with 206.

Defensively the Broncos are also very  good with only giving up 128, second once again only to Estevan. Flin Flon ranked third with 158.

Specialty teams are always a big part of the post season and both these teams numbers were very similar through out the season.

The Bomber PK did struggle in the regular season and was ranked 8th over all at 79.6 %

Humboldt was consistantly in the top 3 all year.

No matter what go's down we will continue to broadcast every single Flin Flon Bomber playoff game including the first two games in Humboldt tomorrow and Friday.

Here is the complete playoff schedule for this series