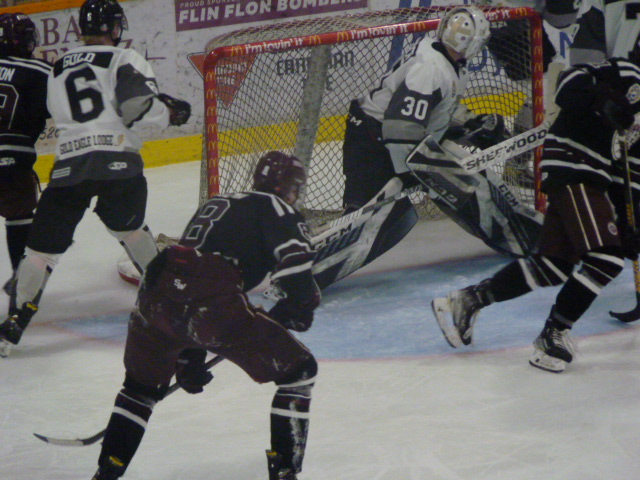 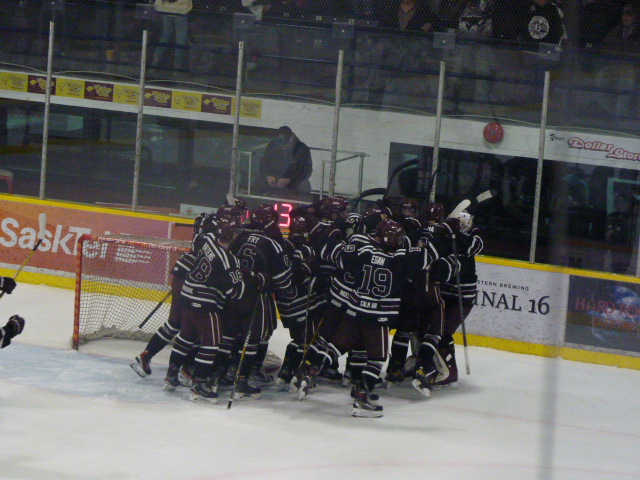 It was another electric night at the Whitney Forum with over 1300 fans in attendance to cheer on their home town Bombers in game 6 of the SJHL Quarter Final.

The Maroon and White express did not disappoint and fed off the energy of the crowd with a solid 6 to 2 victory and the series win.

After dropping the first two games in Battleford, the Bombers managed to win the last 4 including 3 on home ice.

It was a great start with Drew Kuzma and Zac Smith both scoring their second of the series in a 25 second span to make it 2-0 quickly.

Give the Stars credit, they never quit and were able to tie the game with Dylan Esau scoring the games only pp goal, his fourth of the series. Keiton Klein scored his second in as many games,  jumping on a loose puck in front of the Bomber net to tie the game early in the second.

You just had a feeling that the Bombers were not going to be denied and it was going to be their night.

They kept coming and Jacob Vockler scored another highlight reel goal when he brought the puck in over the Battleford line and went behind the net and came out front for the beautiful wrap around.

Battleford goalie Michael Harroch lost track of where Vockler was on the ice.

That stood up as the game winner with Brett Wieschorster burying his fourth of the series late in the period to put Flin Flon up 4 to 2.

More pandamonium in the third when crowd pleaser Gabriel Shipper got in on a break away to score his fourth just over a minute in.

The crowd went nuts and the celebration was on. Lucas Fry would score his first ever SJHL playoff goal into the empty net with just over a minute remaining to make the final 6 to 2.

The fans were loud all night and their participation in this series was nothing short of tremendous. They  were the turning point for the Bombers who trailed the series two games to none and added the spark that the team desperately needed.

Last night was the first game in the series where the Stars out shot the Bombers 42 to 36.

Now Flin Flon will have to wait and see who they play in the Semi- Finals. Melfort has forced a game 7 in their series with Yorkton.

The Mustangs won game 6 last night with a solid 5 to 3 win in Yorkton  and host game 7 on Tuesday.

If Melfort wins then the Bombers will play Estevan, and if Yorkton wins it is off to Humboldt.

No matter who it is you will be able to catch all the playoff action once again on 102.9 CFAR and flinflononline.com.

A big thanks to all the fans from Bomber nation for making the Whitney Forum the holy grail once again. We also appreciate all the fans for reaching out to us on social media with encouraging messages for the organization.

Can't wait to do it again in round 2.