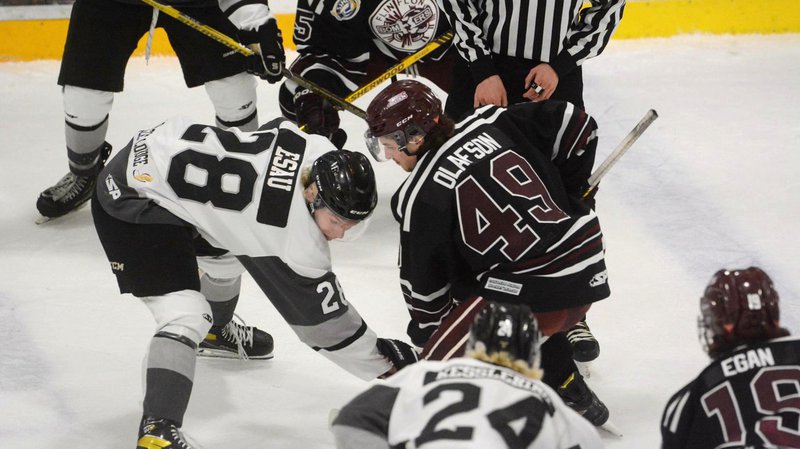 Don't look now,  but the Flin Flon Bombers are just one win away from moving on to the SJHL Semi- Final.

After dropping the first 2 games, the Bombers have won 3 in a row including a 3 to 1 win in Battleford on Friday.

Gabriel Shipper led the way with a pair of goals including his second and third of the series.

Shipper scored the only goal in the first period, when he picked up a loose puck and drove to the net beating Michael Harroch 5 hole. It was a great effort and it just simply amazes me how hard and how and intense he is for a guy his size.

Shipper wasn't finished yet as he also scored in the second period. He grabbed a loose puck just inside the Battleford blue line, made a toe drag and scored top shelf just under neath the cross bar.

That would stand up as the game winner. Flin Flon did get an insurance goal from Brett Wieschorster when he scored off the face-off early in the third period.

Battleford did try to mount a come back midway through the third and did get rewarded with a goal from Keiton Klein.

The Bombers and their goalie Cal Schell did bear down and were able to hang on for the 3 to 1 victory and a 3 to 2 series lead.

Schell is playing better and ended up making 29 saves for his third win of the series.. Michael Harroch was once again the busier goalie and wound up with

I was a little surprised with the lack of urgency on Battleford's part in such a big game but I know they will be a lot better tonight. The first 10 minutes will be critical for Flin Flon.

Game 6 is at the Whitney Forum and is expected to be a mad house. The Steelworkers have purchased tickets for the kids and we are expecting a crowd of at least 1000.

Tuesday and Wednesday were electric and I have been talking with a number of fans who tell me they have not felt this type of excitement since the RBC in 2001. I agree.

Don't forget to bring your radios and mobile devices for another installmet of Creighton Furniture Flin Flon Bomber Playoff Hockey. It all begins with the Great North GM Coach's Show at 7:10.