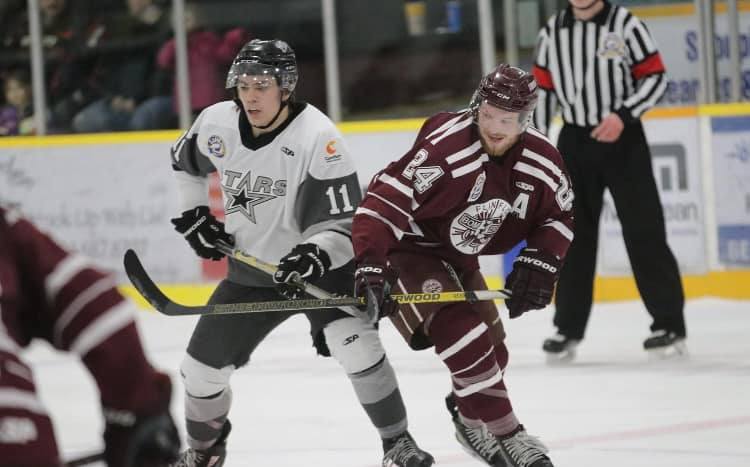 Down 3 to 1 after two periods last night, it looked like the Bombers were going to have to go to North  Battleford to stave off elimination on Friday.

The Maroon and White express emptied the tank and managed to score twice to get the game to OT.

Flin Flon attacked the crease and their third line produced both goals with Brett Wieschorster and Matt Raymond both finding the back of the net.

The large crowd jumped on their backs and you could see the Bombers starting to gain more confidence as the third period rolled along with lots of chances late to win it.

The Stars were actually the better team early in OT, and much of the play in the first few minutes was in the Bombers end.

All of a sudden Gabriel Shipper led a 3 on 2 rush down the ice and fed a picture perfect pass in front of the net to Jacob Vockler,  who fired it into the top of the net for his team leading third goal of the series.

Beautiful goal and the OT winner as the Bombers came from behind to stun the Stars 4 to 3 and pure mayhem after that. The crowd went wild and gave the team an incredible ovation as they left the ice.

Flin Flon's other goal came from Zac Smith who potted his first of the playoffs in the first period.

The Battleford goals came from Dylan Esau who scored a pair including a short handed goal and Evan Waldie.

Cal Schell played his best game of the series and looked to get his swagger back and was real good in the third and OT and ended up with 30 saves.

Michael Horroch was great once again and stopped 45 out of 49.

The best of 7 is now tied at two a piece and is now down to a best of 3. The two teams will play game 5 at Access Communications Centre on Friday and game 6 guaranteed to go this Sunday at the Whitney Forum.

Don't forget to catch both games on 102.9 CFAR and flinflononlione.com with the Great North GM Coach's Show at 8:10 Friday and 7:10 on Sunday.