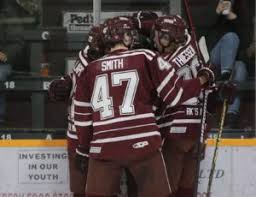 It was an electric atmosphere at the Whitney Forum last night as fans were pumped up to watch a home playoff game for the first time in two years.

The home team didn't disappoint with a solid 4 to 2 win over the Battleford Stars to take game three and get back in the series.

Brett Wieschorster, Xavier Lapointe and Drew Kuzma all scored their first of the playoffs with Rylan Thiessen scoring his second of the series on the power play.

Jake Southgate and Ryan Kesslering responded for the Stars.

The game seemed to be played entirely in the Stars end and the Bombers out shot the Stars for the third straight game 44 to 23.

The Flin Flon power play also answered with two big goals last night and is now 3 for 18 in the series.

That was one of the big differences in the first two games in Battleford, where the Bombers lost  the specialty teams battles.

This was a must win for  the Bombers who  didn't want to go down 3-0 in the series and found out how tough that was the last time these two teams met three years ago.

The crowd was loud and really was the extra man that Flin Flon needed, and you could tell the players fed off the energy.

This was by far the largest crowd of the season and the hockey club wants to thank every one for coming out and are hoping for a capacity crowd once again tonight.

The Whitney Forum truly is a special place and I know a number of Bomber parents got to enjoy the atmosphere for the first time.

Don't forget to join us once again for Creighton Furniture Flin Flon Bomber Hockey tonight as we will be back on the air at 7:10 with the Great North GM Coach's Show.

A big thanks to Raphael Saray and Mike Slip for covering last night's  game and doing a great job bringing the broadcast to the Bomber nation.