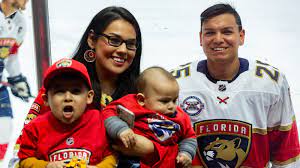 Cross Lake Manitoba's Brady Keeper has signed a new contract with the Vancouver Canucks ending a three year stint in Florida where he only dressed for two games.

It is a two year deal worth $1.525 million and it is a chance to continue his career in Canada.

Keeper has played the majority of his games with the Springfield Thunderbirds of the AHL where he picked up 18 points in 61 games including 6 goals.

Keeper is a former  standout with the OCN Blizzard where he played 161 games over three seasons between 2014-17.

In his final year he was the team captain and picked up 48 points in 48 games en route in being selected the top defenseman in the MJHL.

After finishing his junior career, Keeper went on to the University of Maine for two seasons before joining the Florida Panthers in 2019.