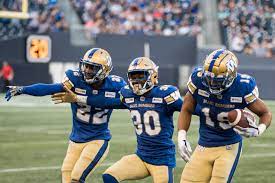 A huge Canadian tradition will make it's much awaited return to friendly Manitoba on Thursday August the 5th with the return of the CFL.

The last Grey Cup Champions of record the Winnipeg Blue Bombers will host the Hamilton Tiger Cats at IG Field in a re-match of the 2019 classic.

To make it even more special the province has announced full capacity for the game with over 33,000 fans expected.

The football club has announced that game day tickets are now  available for all 7 home games  with season ticket holders having first crack at single game tickets.

Season tickets and flex packs are also available for purchase. You will also have to be fully vaccinated before being allowed in the stadium and you must have your Manitoba immunization card either paper or digital version.

“This is a great day for Bomber fans,” said Blue Bombers President and CEO Wade Miller after the announcement. “Manitobans got to this point by going out and getting vaccinated and that needs to continue for us to all recover from this pandemic. So, August 5th we’ll be going full-steam ahead.”

Due to all the protocols with Covid,  the CFL was forced to have a condensed season and will play 14 games instead of the usual 18 and will not play the Grey Cup til Sunday December the 12th in Hamilton.