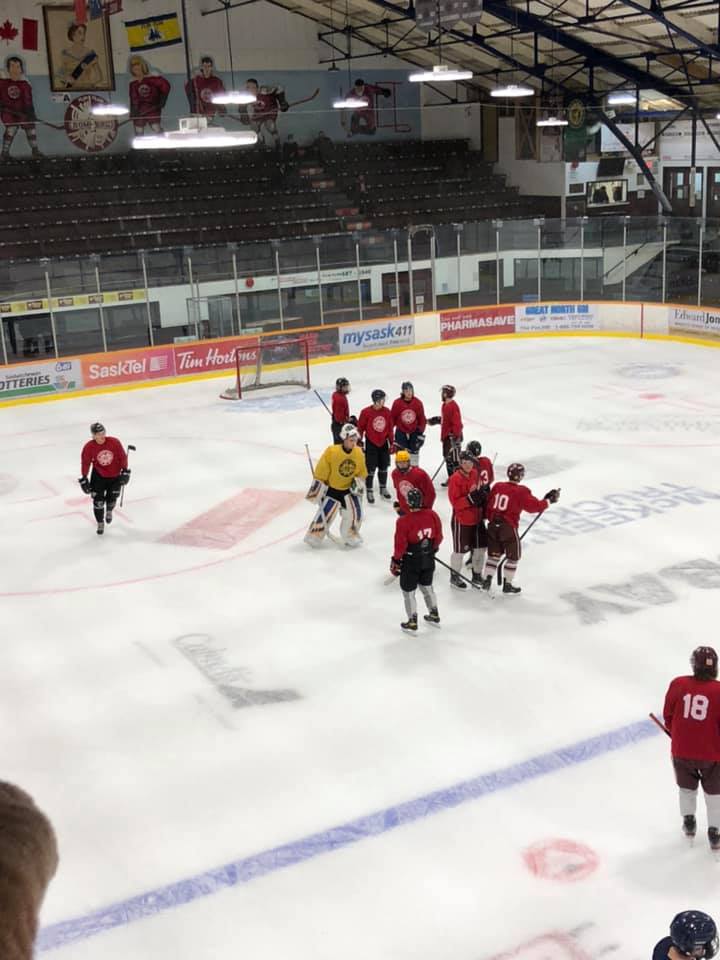 Despite a lack of atmosphere, a spirited affair went down at the Whitney Forum Sunday afternoon for the annual Flin Flon Bomber Maroon and White intersquad game.

In front of a crowd of approximately 20 fans composed of billet parents -  lineups entirely composed of newcomers showed off their ability. The game featured a unique format of two 30 minute halves.

Hunter Lolacher (03) got the start in net for Team White while Max Hildebrand (04) was in between the pipes for Team Maroon.

Team White’s Nathan Flodde(03) kicked off the scoring with a marker just before the midway point of the first half assisted by Jakin Lawrence (04). Jordan Pfoh (02) responded for Team Maroon approximately three minutes later with a feed from Adam Beamin (05) who has been a defensive stand out during camp.

If crunch of the game awards were to be handed out, one would have to go to a hip check late in the 1st half as Marek Schneider (03) of Team Maroon almost sent Nate Gagne into his own Team White Bench.

New netminders were brought in for the 2nd half with Jared Thompson (02)  in goal for Team White and Justin Duck (03) being the netminder for Team Maroon.

Things opened up early  with Cole Duerreault (02) scoring for Team White, assisted by Ashton Ferstrer (03)  which was quickly responded by Nate Gagne’s (02) goal for the Maroons with assists from Kylynn Olafson (04) and Morgan Daneiluk (03).

Fireworks flew with the game’s lone fight as Hassen Himour (02) of Team White dropped the gloves with Justin Lies of Team Maroon in a short but energetic scrap. Lies went on to score moments later  with an assist from Jordan Pfoh (02)

The highlight reel goal of the game came from Ashton Ferster of Team White who was able to put a breakaway goal past Dueck for the game winner. Himour added an empty netter before time ran out to give Team White the 5-3 victory.